Disney+ recently introduced the new cooking challenge show Be Our Chef. This new series invites families from diverse backgrounds to compete in a friendly competition to create the next great Disney Parks dish.

With Be Our Chef in mind, we’ve decided to revisit some old Disney Parks favorites, and follow Disney’s recipes to recreate those dishes at home. 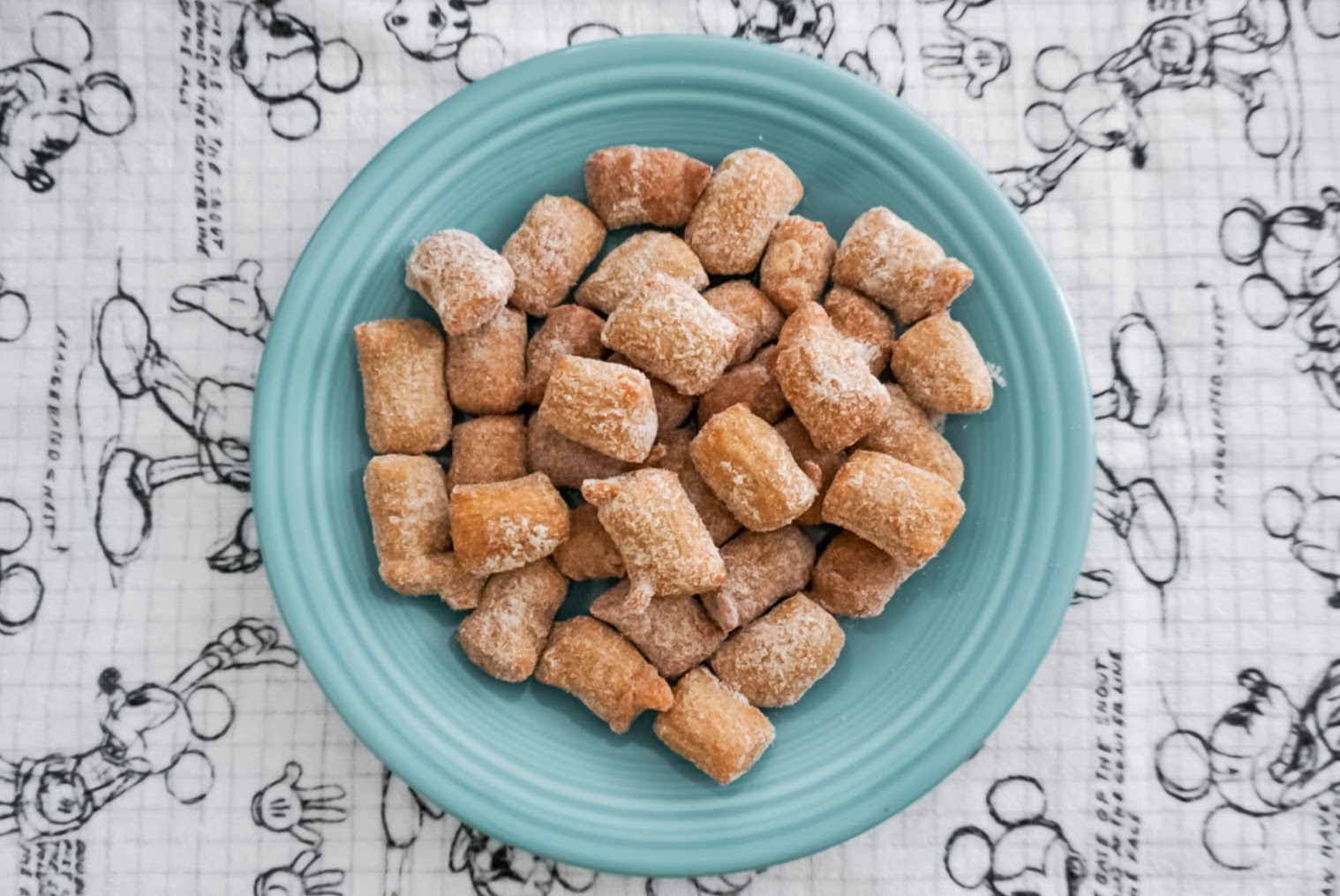 When you think of your favorite treats in a Disney Park, odds are churros are near the top of the list. Luckily, the Disney Parks Blog recently released a recipe for those delicious sweet treats. Granted, these are going to be a little different than what you’re used to, but only because they’re smaller. I can assure you, these churro bites taste just like the classic snack you enjoy in your favorite Disney park. 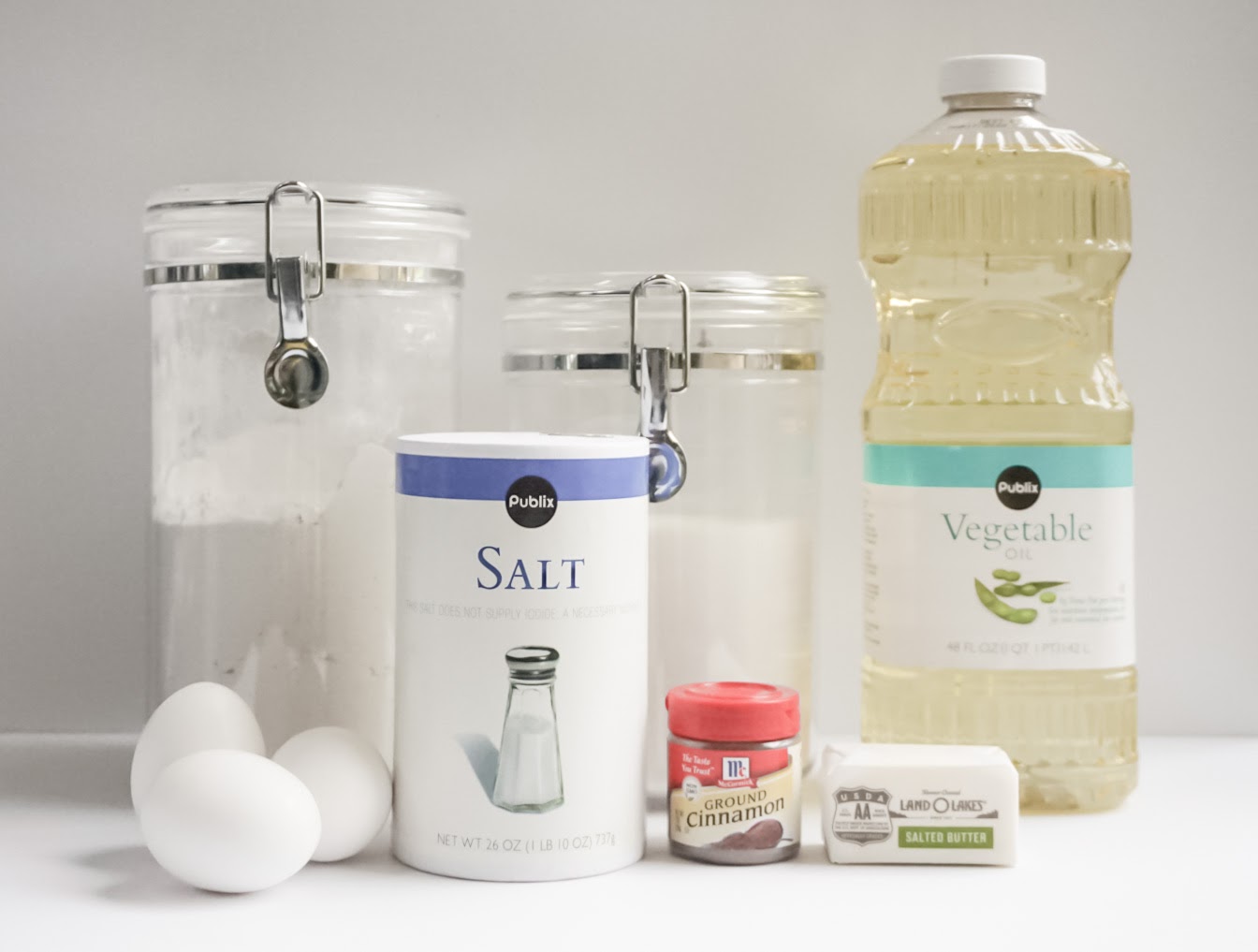 2) Reduce heat to low and add flour and stir vigorously until mix forms a ball. This will happen rather quickly. Remove from heat and let rest for 5-7 min. 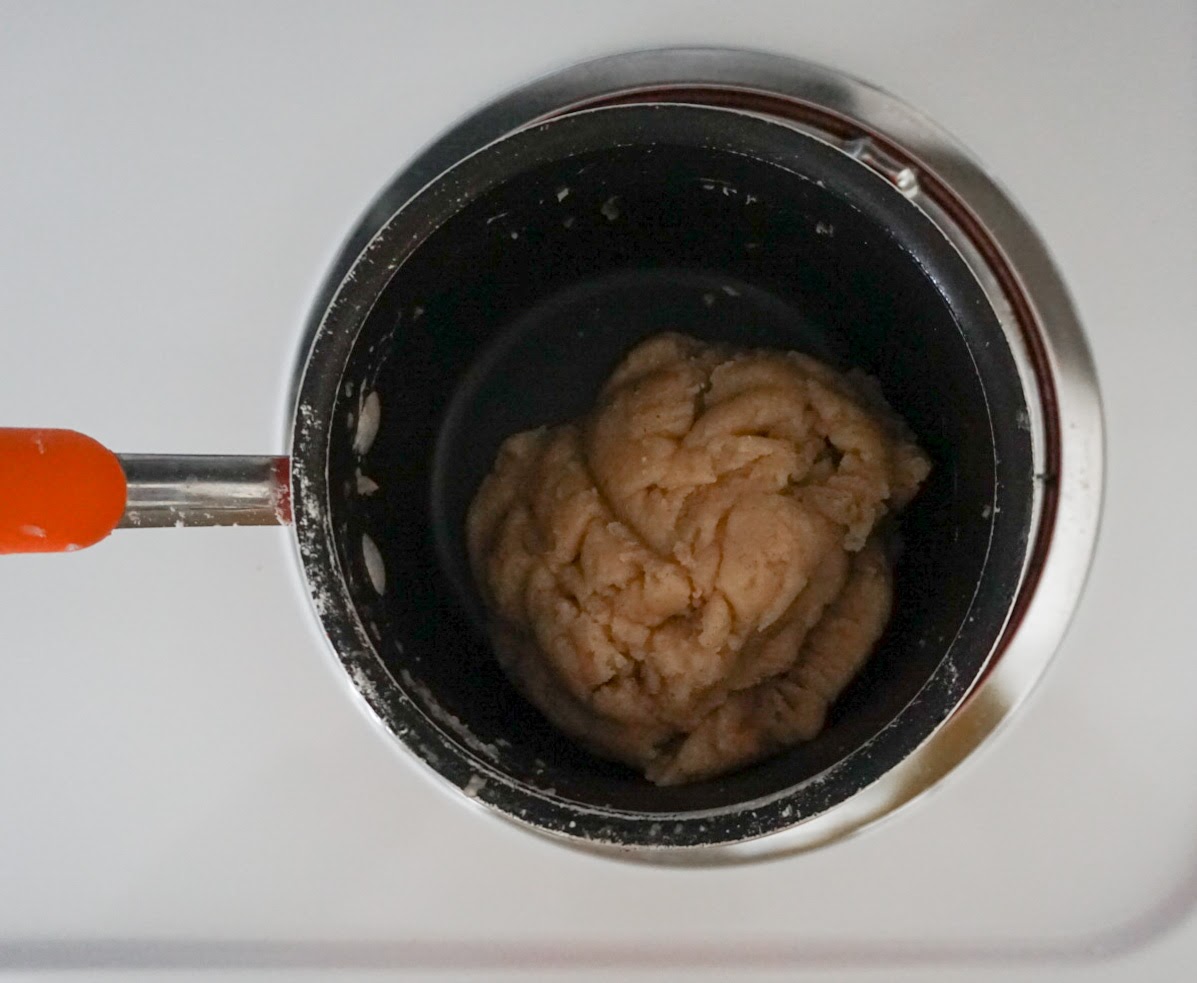 3) Add eggs, one at a time, and stir until combined. Set aside. 4) Heat oil in medium skillet or 1-quart saucepan over medium-high heat or until temperature reaches 350˚.

5) Spoon dough into piping bag fitted with large star tip. Don’t have a piping bag? Neither did we. Instead, use a sandwich bag and cut a small opening in one of the bottom corners. This will work just as well. 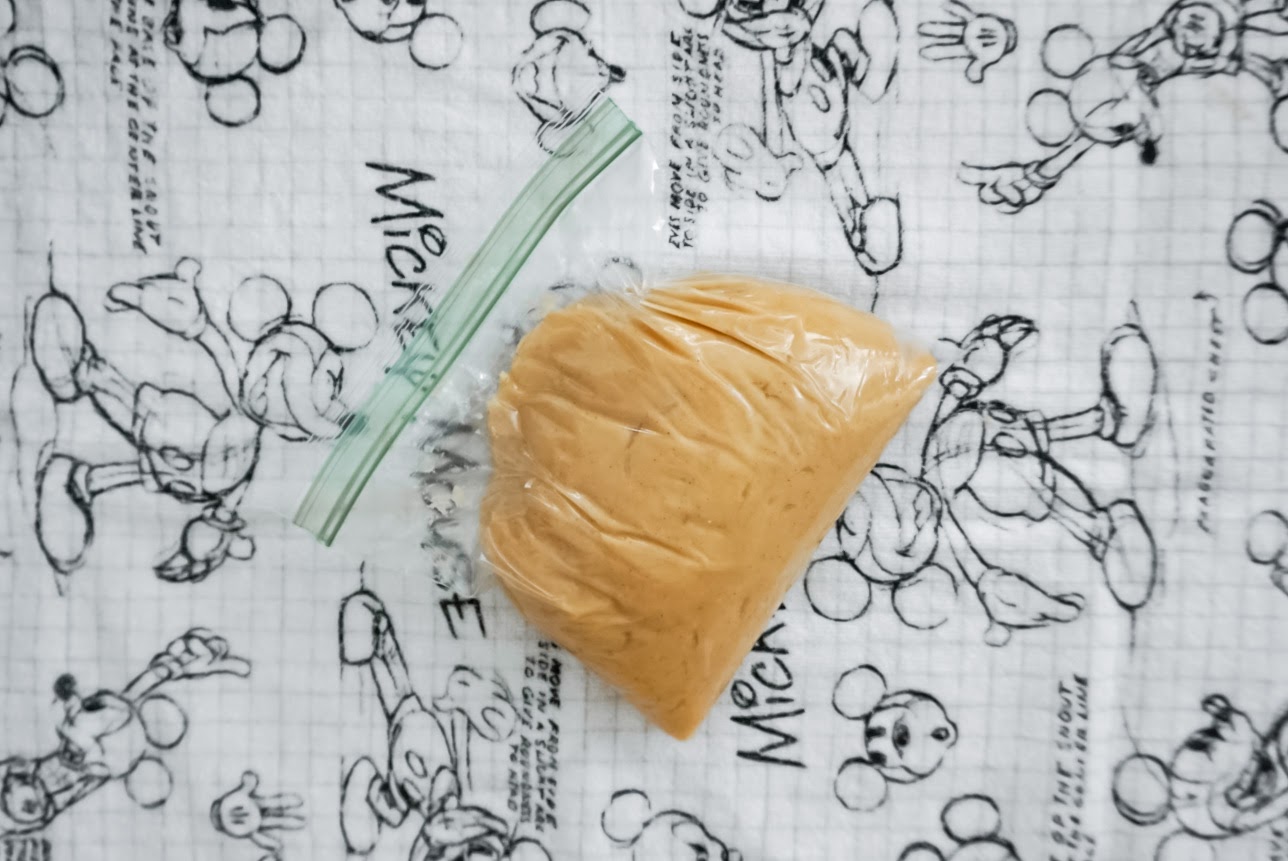 6) Pipe 1-inch strip of dough over saucepan, cut with knife, and drop into hot oil. Repeat until churro bites fill saucepan with room to fry. If you’re using a sandwich bag instead of a piping bag, make sure the top of the bag doesn’t open as you’re squeezing. 8) Mix sugar and 1/2 teaspoon cinnamon in medium bowl. We use a small Tupperware container for this because it makes the next step much easier. 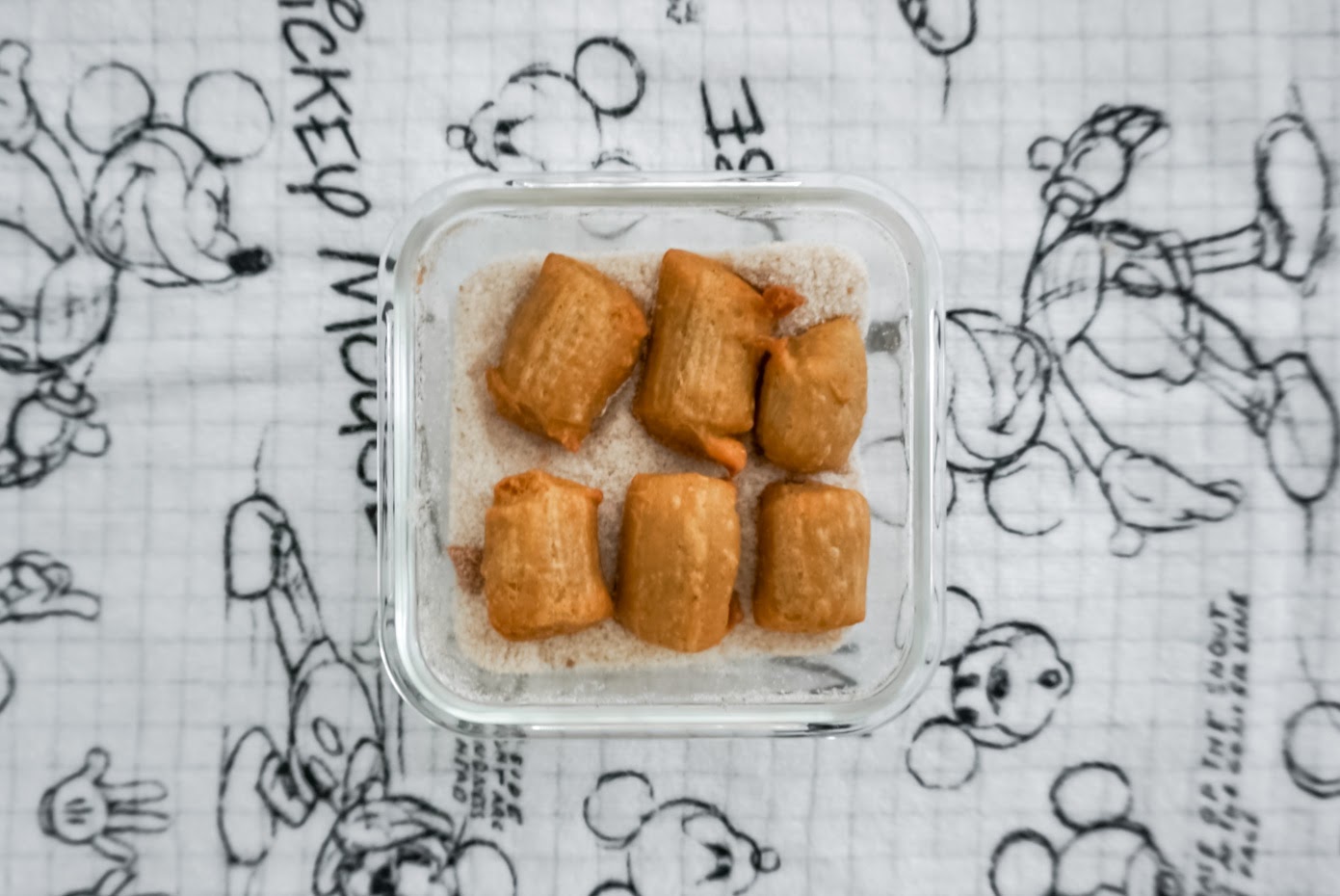 9) Toss in churro bites in cinnamon-sugar mixture until coated.

The Disney Parks Blog recommends serving your churro bites with your favorite dipping sauce. Personally, we ate them as is, but you can always add a little chocolate, caramel or whatever else you might prefer.

Want to make more of your favorite Disney Parks recipes? Check back every Friday when new episodes of Be Our Chef hit Disney+ as we provide some more great Disney treats for you to make at home.

Check out some of our previous recipes: