The second season of Marvel’s Storyboards, the web series available on the Marvel Entertainment YouTube channel, wrapped up today with high-altitude mountaineer Ed Viesturs as the guest. 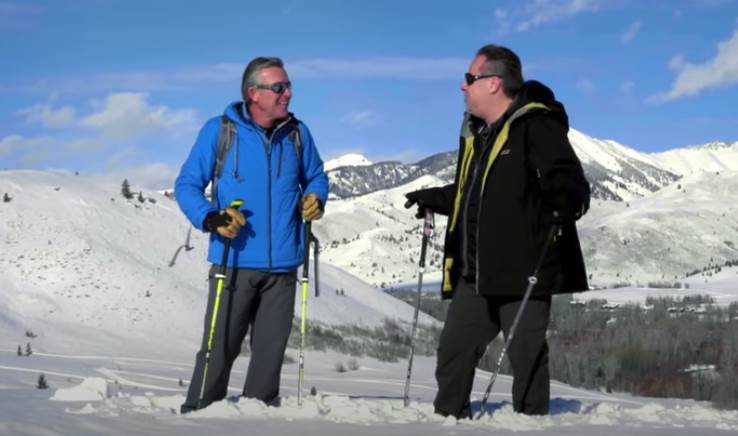 Marvel executive VP, creative director Joe Quesada introduces the episode by talking about Viesturs’ incredible accomplishments as “one of the world’s most elite and legendary mountain climbers.” Quesada arrives at Viesturs’ home, where they begin their journey.

They head to Viesturs’ garage an begin to gear up for a hike. Quesada compares the garage to that of Tony Stark, with all kinds of gear and technology at Viesturs’ disposal. Once Quesada gets completely geared up for their hike, Viesturs informs him that it’s a little overkill and he won’t be needing all the gear he has on.

Quesada asks Viesturs about what happens to the human body when climbing these high peaks and how he prepares his body. Viesturs explains that the majority of the risk in what he does comes from the decision making. Quesada explains that, when writing a comic, a mistake can easily be fixed. In Viesturs’ world though, there is no room for error.

The two begin their hike to the top of Griffin Butte, an 8,700 peak. As they begin their journey, Viesturs explains his concept of “listening to the mountain.” He explains that he is looking for whet the clouds will do in a few hours, whether the snow is stable enough and other things of that nature. He also talks about breaking down the journey into days, hours and even steps, rather than looking at the journey as a whole.

As they continue on, Quesada gets more and more out of breath so they return back to Viesturs’ home to continue their conversation. Once there, Quesada likens Viesturs to Daredevil or “The Man without Fear.” Viesturs argues that he isn’t fearless because fear keeps you alive and it’s necessary for what he does.

Viesturs describes his origin story, explaining that the book Annapurna is what inspired him to become a climber. He talks about some of his early expeditions, including one that ended with his team turning around just 300 feet from the summit of Mt. Everest. He explains that his team still had two hours of climbing ahead of them and a coming storm forced them to turn around.

Viesturs then gets into another Everest expedition in 1996, in which he and his team decided to stop short of the summit while two other teams decided to continue. Those two teams got caught in a storm, resulting in the deaths of eight people. Viesturs describes the feeling of just being helpless to rescue the other teams, in what was an incredibly emotional moment for him.

Everything came full circle for Viesturs as, in order to complete his goal of climbing all 14 8,000-meter peaks in the world, he had to attempt to climb Annapurna. He explains that he had attempted to climb the mountain twice before and he and his team decided to walk away because of the danger. Eventually, he decided to get back to Annapurna and finally reached the summit, making him the only man in the world to climb the 14 highest peaks.

That was actually not Viesturs’ final 8,000-meter climb though as he explains that he went back to the top of Mt. Everest one last time after. That allowed him to walk away from mountain-climbing happy.

Finally, the episode comes to a close on an inspirational note as Viesturs explains that “we all have our own Annapurna.” He talks about the best part of what he’s done being that he hears from other people about how he’s inspired them to do things they never thought they could.

Previous episodes in season two of Marvel’s Storyboards have featured: