Welcome back to another “Ranked” article here on Laughing Place. A few months ago, we ranked the Top 10 attractions at Knott’s Berry Farm, but what about some of the unique attractions that no longer exist? Sadly, I never got the chance to experience any of the attractions mentioned below, but I figured I would rank what attractions seem the most interesting to me.

So with that, let’s countdown the Top 8 extinct attractions at Knott’s Berry Farm! Well props for trying at least. Located where Xcelerator is in the park today, Windjammer Surf Racers was a dueling surf themed coaster that was plagued with issues right from the get-go. The coaster only operated from 1997 to 2000, and Knott’s eventually sued the manufacturer, TOGO, for massive design flaws leading to lengthy downtimes. Instead of attempting a fix, Knotts just bit the bullet and replaced the attraction with Xcelerator in 2002, which must have been a success, as it’s still at the park today.

For more on the failure of Windjammer Surf Racers, check out the YouTube video from Expedition Theme Park below, which gives a detailed history of this troubled attraction: Photo from the Orange County Archives

Tijuana Taxi was an antique car ride that can be found at many theme and amusement parks across the country to this day. The ride opened in 1958 as the Merry Go Round Auto Ride, then was renamed to the Antique Auto Ride in the late 1960s, before finally being renamed Tijuana Taxi in 1976. The name comes from the hit Herb Alpert and the Tijuana Brass song of the same name. The attraction was one of many at Knott’s designed by legendary designer Bud Hurlbut. When the attraction closed in 1986, it was moved to Bud’s Castle Park theme park in Riverside, CA, where it still operates to this day! Back in the day, Knott’s had not one, but two antique car rides. The more interesting of the two (to me at least) was Gasoline Alley, which weaved below the Wacky Soap Box Racers (eventually the spot for Windjammer Surf Racers and then Xcelerator). The ride had a Roaring 20’s theme along with the rest of the area, and was eventually removed in 1996 to make way for the aforementioned roller coaster(s). Sadly, Knott’s no longer has a ride of this sort, but feel free to take the short drive to Anaheim to experience the similar Autopia at Disneyland. Corkscrew was an iconic roller coaster, not just for the park, but for the entire world, as it was the first modern-day inverting coaster. Yes, the Corkscrew was the first modern coaster to go upside down. Typically, that kind of status alone would be enough to keep a coaster around, but as Knott’s is very land-locked, they removed Corkscrew in 1989 to make room for Boomerang, another extinct coaster that does not make this list. Today, that location is home to HangTime. But if you want to experience the original Corkscrew, you actually still can! Corkscrew was moved to Silverwood Theme Park in Idaho. Now this was a unique looking attraction! Built around the edge of the still-standing Sky Cabin tower, the Sky Jump took passengers in boxed cages and gently dropped them 200ft back down to the ground. I’m sure this was a psychologically thrilling ride, with just how open the experience was. Knott’s removed the Sky Jump from the tower in 1999, however the Sky Cabin still operates to this day. If you want to know what this experience feels like, the last remaining installation is still in operation at Six Flags Great Adventure in New Jersey. How do you follow up a momentous, thrilling coaster like Corkscrew? You go the complete other direction and create a well-themed, but smaller attraction called Motor Cycle Chase. This was one of Arrow Development’s classic Steeplechase attractions. The Cycle Chase proved to be somewhat unsafe for guests, in addition to being pretty low capacity. So a few years later, the attraction was changed to Wacky Soap Box Racers, adding the classic soap box ride vehicles. The theming throughout led to this being called the first “outdoor dark ride,” and it really looked like a lot of fun. Sadly, the attraction was removed in 1996 after some years of neglect.

2. Kingdom of the Dinosaurs 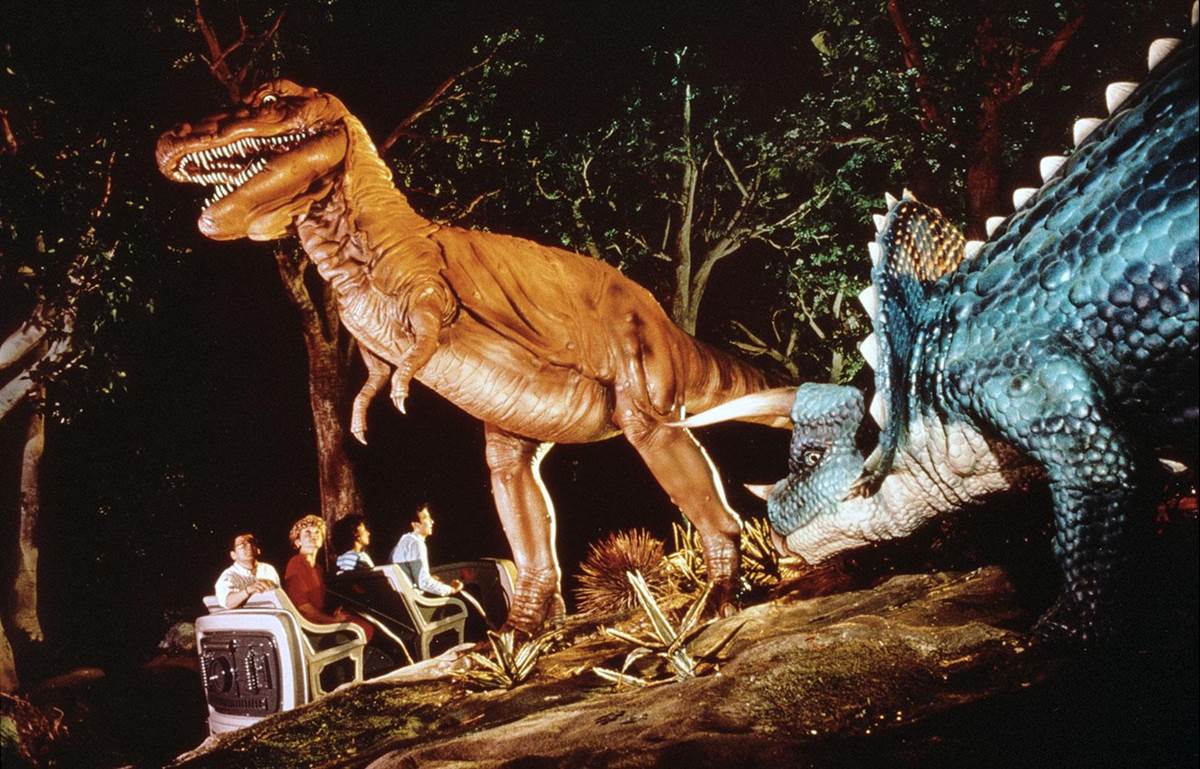 We’re going to finish off this countdown with two major dark rides that occupied the same location. At #2 is the second occupant, Kingdom of the Dinosaurs. The attraction began as you entered a time machine which took you back to the age of the dinosaurs, along an atmospheric route past these prehistoric creatures. The ride actually lasted a pretty long while, from 1987 to 2004. The building then spent 11 years vacant before finally becoming a dark ride again, with the opening of the interactive shooter, Voyage to the Iron Reef.

For more on Kingdom of the Dinosaurs, here’s another video from Expedition Theme Park: Photo from the Orange County Archives

Perhaps the best known of all extinct Knott’s attractions is Knott’s Bear-y Tales. This classic dark ride was designed by former Disney Imagineer Rolly Crump, and absolutely exudes his unique style. Featuring a catchy song, beautiful sets and animatronics, you’d be forgiven for thinking this was a Disney attraction. Truly a classic for the park just like the Calico Mine Ride and Timber Mountain Log Ride, it was absolutely a shortsighted decision to remove it in 1986. 25 years later, a spiritual successor opened at the park, Knott’s Bear-y Tales: Return to the Fair. This updated version is essentially a reskinned version of the former Voyage to the Iron Reef attraction, but still features the charm of the original version. While I would have loved to have seen the first version, I’m really glad we have this updated version to enjoy at the park today!

I hope you all enjoyed this ranking of my Top 8 extinct attractions at Knott’s Berry Farm. If you want to see some more theme park rankings, feel free to check out some of my other “Ranked” articles listed below: