Walt Disney World’s 50th anniversary is coming up, with the big day just a few months days on October 1st. To get ready for the event, we at Laughing Place are taking a look at various parts of Walt Disney World, past, present, and future each day, with today a blast to the past. 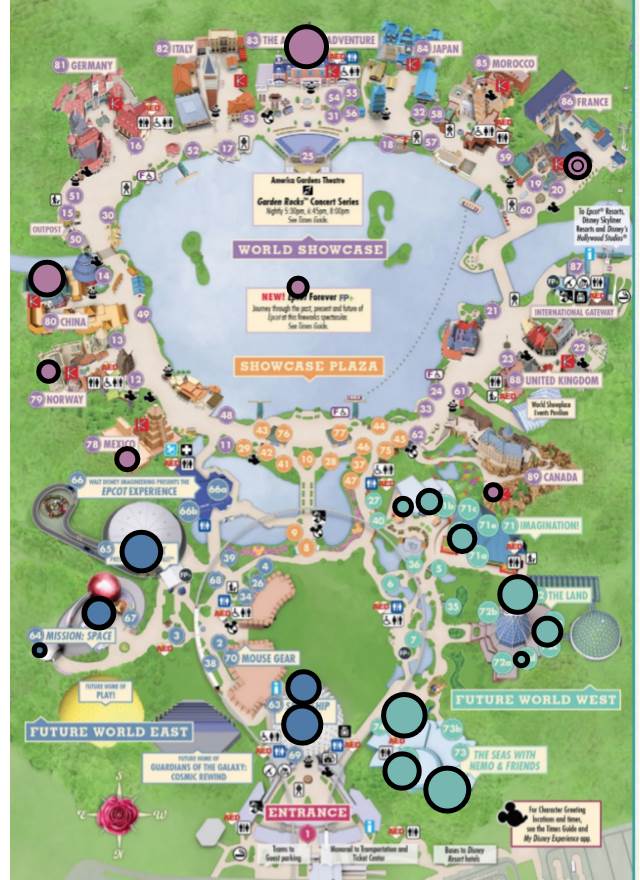 Here at Laughing Place, we have interactive maps of every Disney Park throughout the years (created by yours truly). The maps are a fun way to visually examine how each of these parks changed over the years and serve as a wonderful companion to this piece where I look at which year’s lineup of attractions reigns supreme at Epcot. You can follow along with the Epcot map and let me know if I made the right choice with my pick or if I was off my rocker. So let’s jump in and take a look at some honorable mentions before we get to what I believe was the best year to visit Epcot attraction-wise. 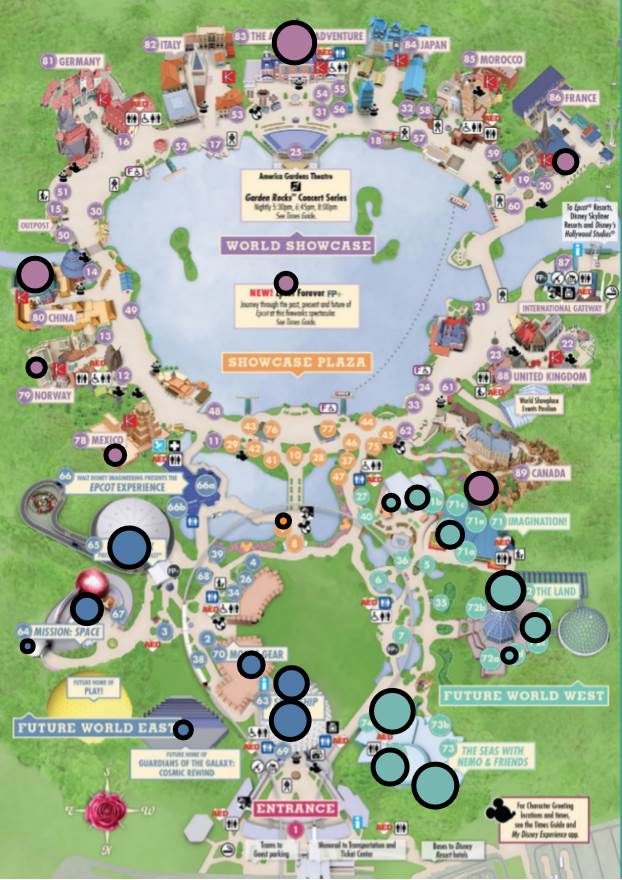 Epcot is kind of a tale of two parks with only three Opening Day attractions still surviving in the park today. Basically, throughout the 1990s, a few attractions would close every year and as will soon become apparent, I am a much bigger fan of the earlier days of Epcot (even though I never got to visit then). But I felt that at least one year from the twenty-first century needed to be represented.

When deciding a year amongst the last twenty-one years, I knew that it had to be a year from 2005 or later because Soarin’ needed to be a part of the lineup. After that, I thought it would be more fitting to choose a year after 2007 because that year saw the end of The Living Seas, El Rio del Tiempo and Wonders of Life Pavilion and I do prefer the earlier version of all of those attractions, but representation is important.

With that in mind, I chose 2016, so that I could include Frozen Ever After and Soarin’ Around the World, but at the loss of the Captain EO Tribute. Both of those attractions may not be as beloved as their predecessors, but I think they brought a much needed energy to the park that helped transform it into the new age that we see today. Plus, we got one last year of Ellen’s Energy Adventure and some more of the crowd favorite IllumiNations: Reflections of Earth. All in all, 2016 was a nice year at the park, but I definitely prefer the next two on this list. 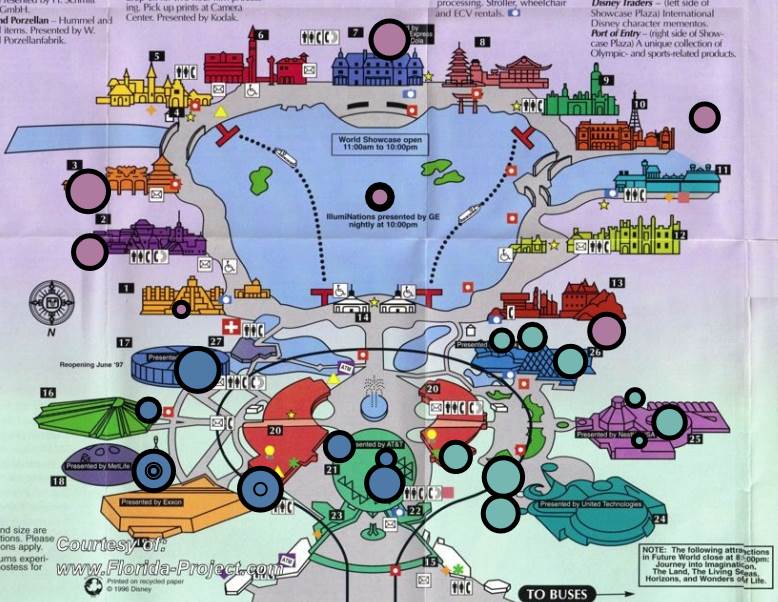 My next honorable mention is 1996, which served as a really nice transitional year between early and late Epcot. I’ll wait to talk about some of the earliest attractions that were around in 1996 and our year of choice, so we can have something to talk about in the next section. But while we are here, let’s focus on some of the changes and why 1996 was not quite as good as the earlier years.

Between the top choice and now, we had a lot of changes in 1994. First, we saw Honey, I Shrunk the Audience take over for Captain EO, and while I definitely prefer the latter, HISTA was also a lot of fun and helped anchor the new Imagination Pavilion (that nearly everyone hated). We also saw the outdated Communicore kick the bucket and Innoventions take over and help prepare the park for the next century. 1994 also saw the switch to the Jeremy Irons version of Spaceship Earth, many people’s preferred choice of the attraction. And finally we got Food Rocks, which I personally liked more than its predecessor Kitchen Kabaret, but the jury is out on that one.

1996 also saw the switch from Universe of Energy to Ellen’s Energy Adventure and most people would say that that was definitely a downgrade, which I would agree with. As you can see, these attractions simply weren’t up to snuff compared to their predecessors, so let’s take a look at the best year in Epcot’s history (in my opinion). Finally, we come to the year that best exemplified the glory of Epcot, 1991. I have long been a huge fan of the early days of Epcot and 1991 was the perfect year in that it had many of the opening day attractions as well as other classics added in the first decade.

Let’s start with opening day attractions that were there, with two World Showcase attractions still around today. The American Adventure and Impressions de France have both survived through all these years and it’s no wonder why. Both of them still stand up today as classics and while Impressions de France now shares time with the Beauty and the Beast Sing-Along, it still holds a very special place in my heart. World Showcase had a few other attractions in O Canada, The Wonders of China and El Rio del Tiempo. While I do prefer the Martin Short version of O Canada, the latter two were both better than their replacements, with a special spot for El Rio del Tiempo, which almost felt a bit ahead of its time.

Elsewhere over in Future World, World of Motion and Universe of Energy also opened with the park. I think there’s an argument to be made that the successors to these attractions were pretty great as well, especially when it comes to Test Track because while World of Motion was fun, Test Track is way more exciting. We also had the Land Pavilion attractions in Kitchen Kabaret and Listen to the Land and with the former’s live narrators originally, that was definitely the version to experience.

Opening in 1983, just a year after the park opened, we got perhaps the two most beloved Epcot extinct attractions in Horizons and Journey into Imagination. I’m certainly in that camp as well because even though I never got to experience either one of them, they are probably amongst the top five attractions that I wish I could have experienced. It would be impossible to be the best year in Epcot’s history without their inclusion.

In the late 1980s, we got a few more major pavilion additions in The Living Seas and The Wonders of Life. With great experiences like SeaBase, Body Wars, Cranium Command and The Making of Me, these attractions were simply stalwarts of the Epcot experience and truly embodied the Epcot ideal of edutainment.

Oh and also, the late 1980s saw the additions of Walter Cronkite’s Spaceship Earth, Captain EO, Maelstrom and IlluminNations. Basically, the park kept building and building on itself until it finally reached its peak in 1991 with all of the attractions coming together and Surprise in the Skies getting a bit of time in the sun. Now if all these attractions being there seems overwhelming, well that’s true because late 80s to early 90s Epcot was truly amazing. I wasn’t even born yet, but if there is any park I could visit in any year, it would be 1991 Epcot because all of those attractions are just true classics and unfortunately primarily gone today.

Soon, we’ll be doing this same exercise for Magic Kingdom, so take some time to explore the other interactive maps and brainstorm your choices.

Thanks for reading and let us know the year you would choose to visit Epcot!