Welcome to Disney Extinct Attractions. My name is Cole, and today I’m going to be Henry’s Little Helper as we look at overlays of one of Disney’s most rocking attractions.

Christmas is right around the corner, and with it, comes holiday overlays galore, especially over at Disneyland. With Haunted Mansion Holiday, it’s a small world holiday and a completely overhauled Cars Land, Disneyland goes all out in transforming some of their attractions to fit the season. However, all of these attractions started getting their overlays relatively recently, so let’s jump back to 1984 and the very first holiday overlay of any Disney attraction, the Country Bear Christmas Special.

Based on the success of the Country Bear Jamboree, Disney decided to try this new seasonal overlay idea in both Disneyland and Walt Disney World. When it debuted, creator Marc Davis was a little iffy on the idea considering that it had never happened before and he was all about upholding the integrity of the attractions that he created.

After checking it out myself, I was really impressed by the show. It did a fantastic job of transforming the attraction, while retaining so many of the elements that made the attraction such a hit to begin with. To be honest, it’s kind of amazing that the Christmas Special was Disney’s first ever overlay because everything felt well-thought out and really well put together from script to decorations. (Plus, it helps that I’ve had the pleasure to get to know one of the writers of the show, Jim Davy.)

As you can see, no element was left untouched because when it comes to Christmas, Disney always goes all out. In fact, the Christmas Special felt like an entirely new show because in reality it pretty much was. All of the same bears that you knew and loved from the Jamboree where there, but everyone was decked out in their own take on the holidays and had their own special Christmas songs to sing. 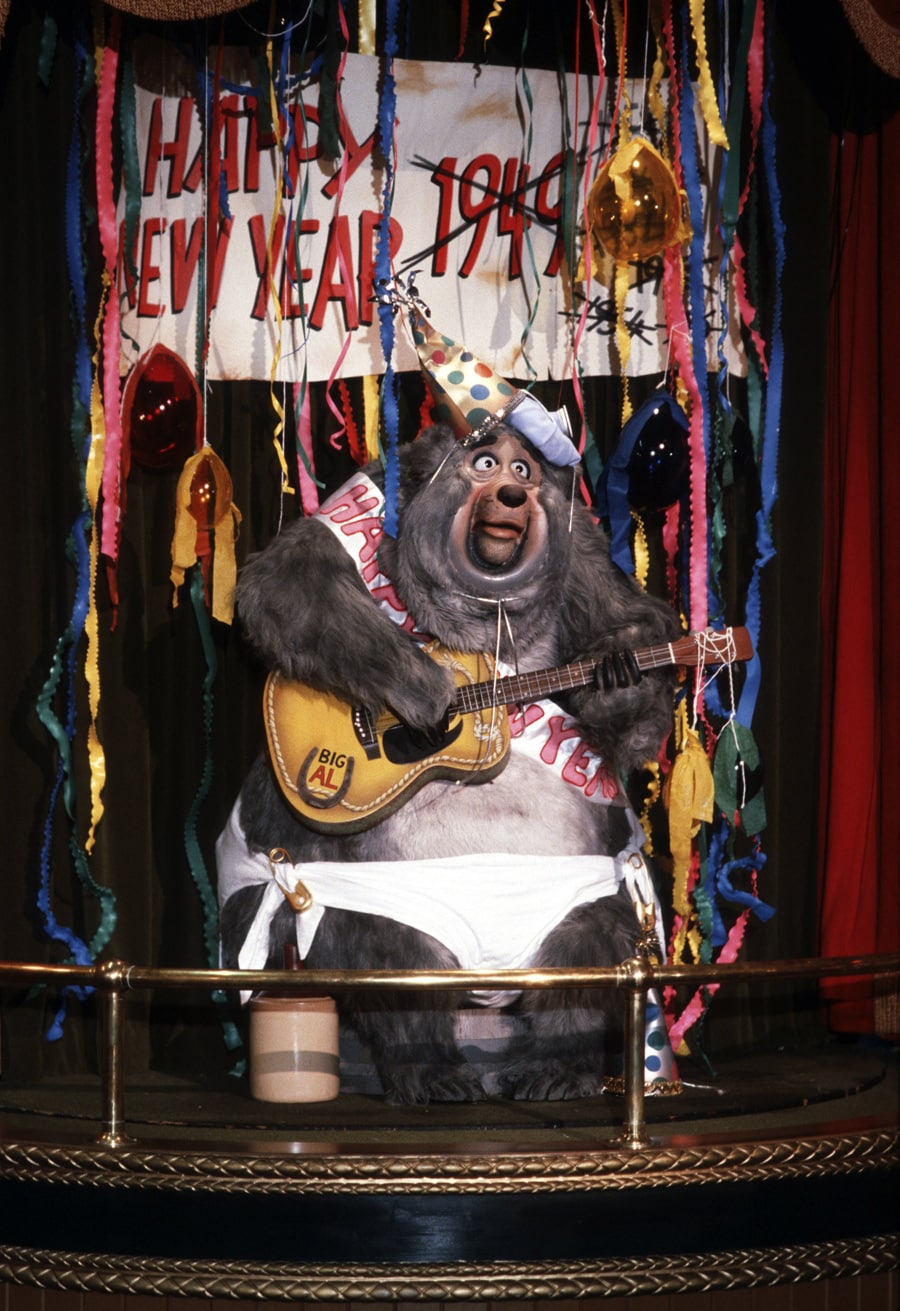 My favorite Country Bear has been, and will always be, Big Al because “Blood on the Saddle” never fails to make me laugh. While he doesn’t get to sing it in this show, they did dress him up as Baby New Year which is pretty fantastic in and of itself.

Overall, the Country Bear Christmas Special was the perfect start to overlays because it showed just how good they could be. In fact, it is pretty surprising that it took nearly fifteen years to see seasonal overlays pop up in attractions like we see them today.

Eventually, the Christmas Special did come to an end at Disneyland in 2000 because of the attraction’s closure. Over in the Magic Kingdom, the overlay continued until 2005 when Disney World brass realized that the attraction’s lack of attendance, even during holiday times, did not warrant the costs associated with putting together the overlay. 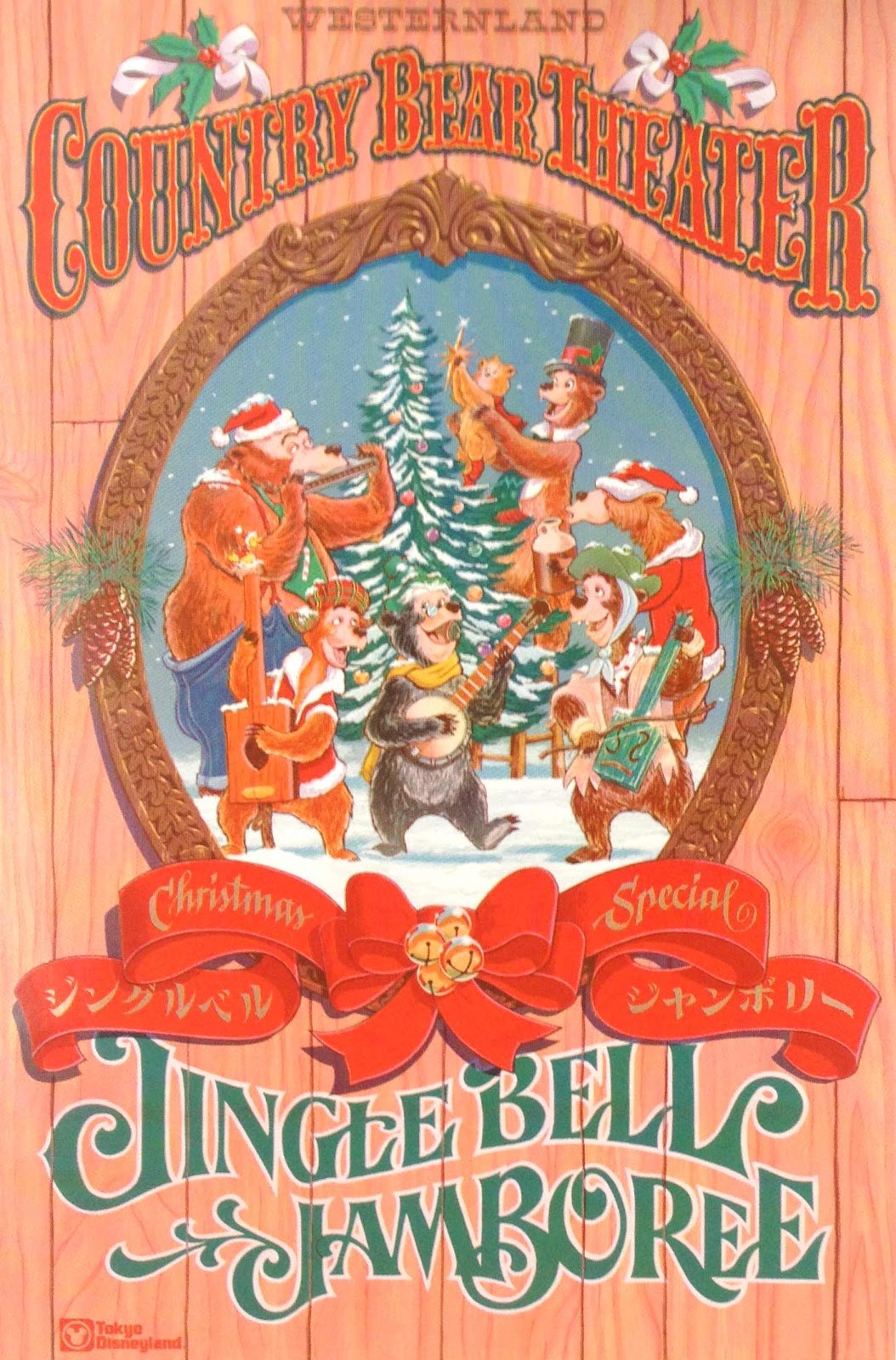 Luckily, guests who still want to experience it can take a quick plane flight to Tokyo to experience the Jingle Bell Jamboree, which is virtually identical, but with some of the show in Japanese as well as English. The Country Bears are much more popular overseas (and who could be surprised looking at Duffy), so it does not appear like any changes to the overlays will come any time soon over there.

Once the Christmas show had started the overlays, Imagineering decided to keep the fun going and create another seasonal overlay for the bears called the Country Bear Vacation Hoedown. 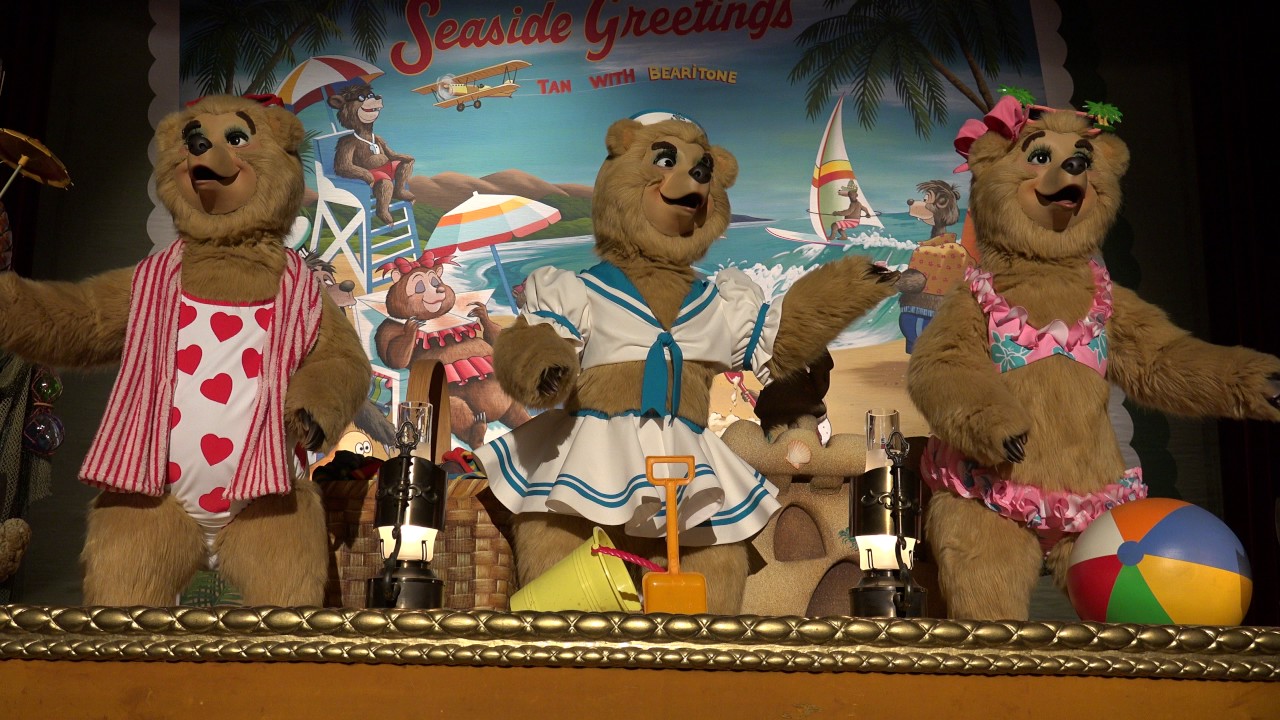 Opening in Disneyland in February 1986 and in the Magic Kingdom in May 1986, the Vacation Hoedown sought to spice up the attraction by focusing on the summer and making some bear adaptations of some popular vacation time songs.

Just like the Christmas Special, the Vacation Hoedown was a completely different show from the Country Bear Jamboree with all new songs, costumes and script. 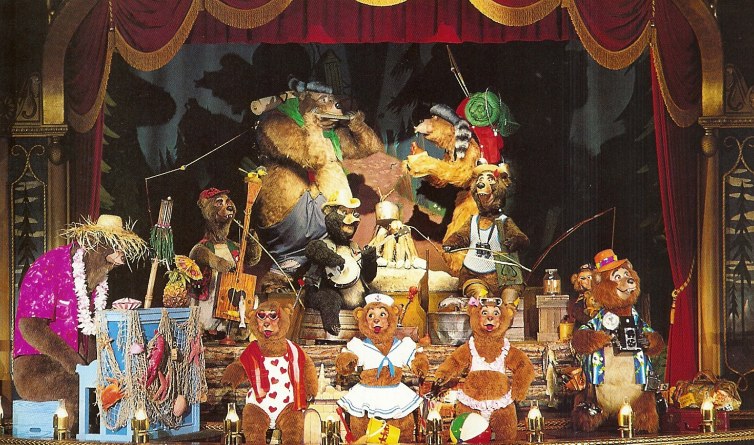 Just looking at all the fun outfits that everyone has on, there is no way that these bears weren’t going to put up a great show. All the songs that they chose really fit both the vibe of the Country Bears and the vacation theme, so a lot of credit needs to go to the show creators from being able to mesh everything so well, especially with it being a pretty novel idea to do a vacation overlay at a place known for its vacations. 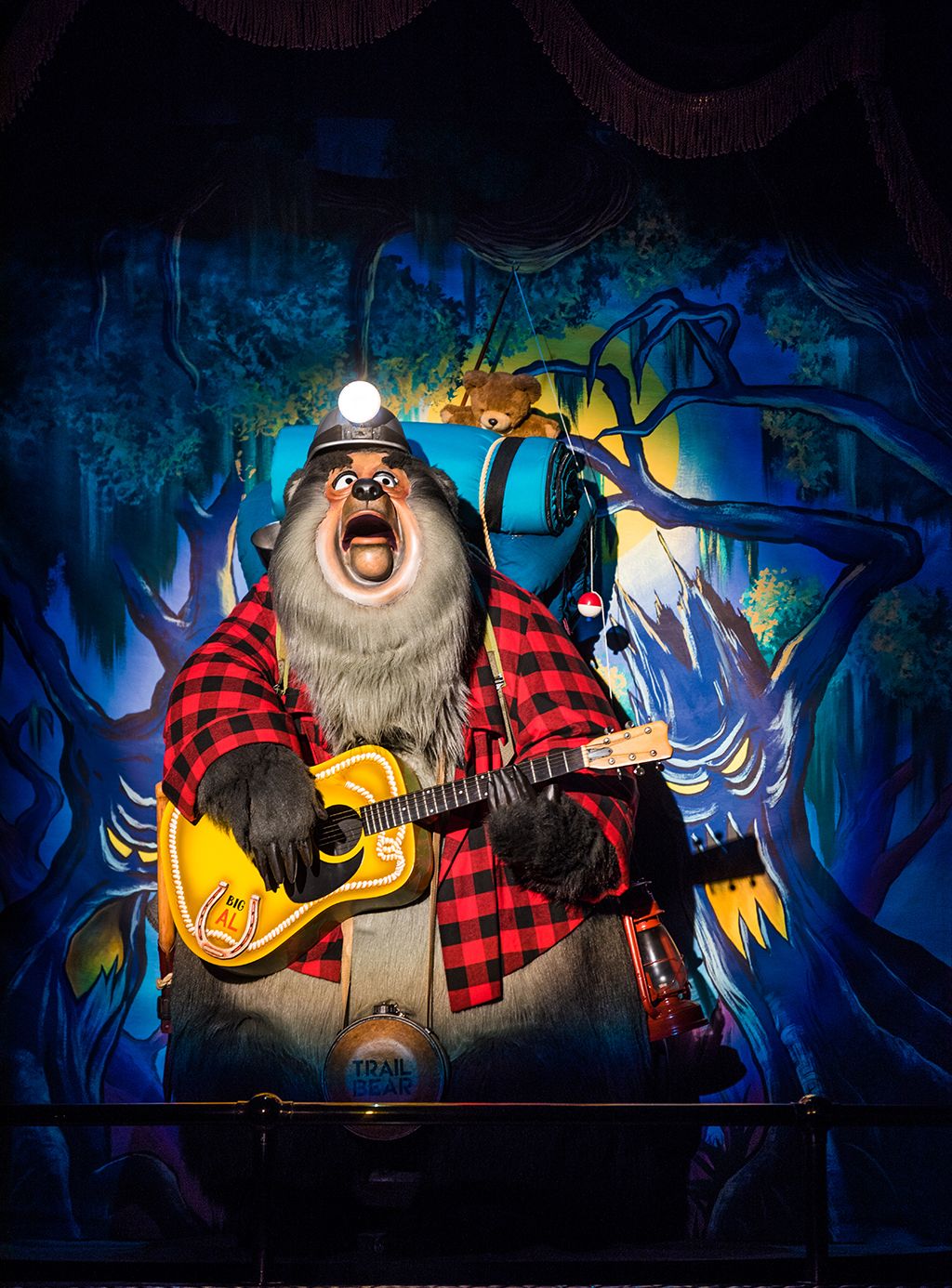 Honestly, the only real gripe that I have with the show is that it took away some of my favorite songs like “Blood on the Saddle” and “All the Guys That Turn Me On Turn Me Down,” but instead I still got to experience some classics like “Rocky Top” and “California Bears.” 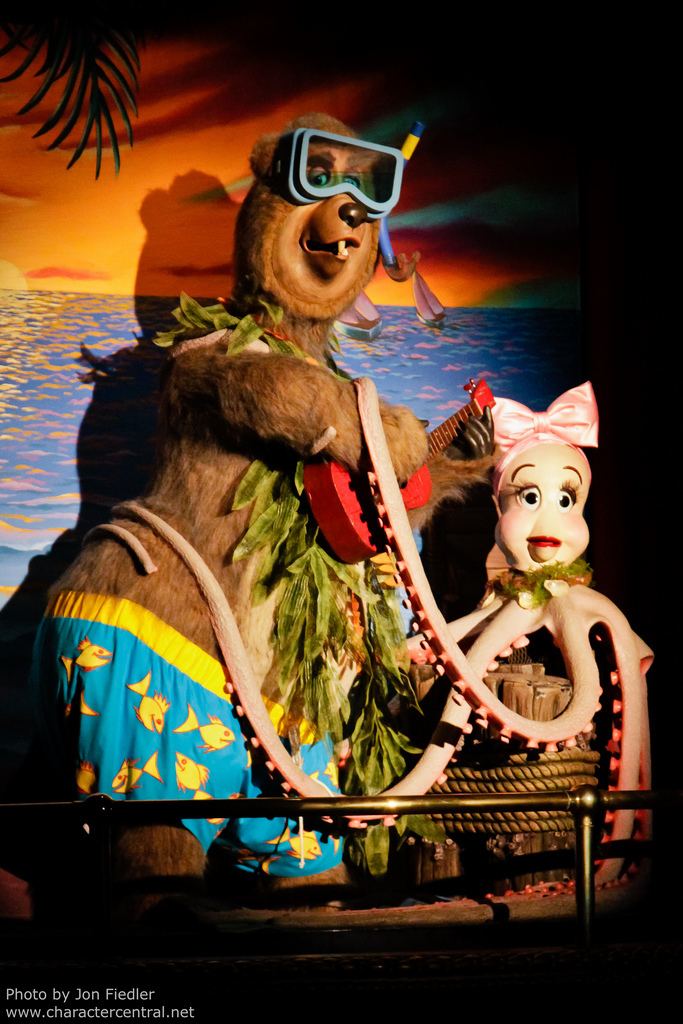 In Disneyland, the Vacation Hoedown was an instant hit and quickly became the full-time show at Disneyland, meaning that the original show couldn’t be found there again, with the only change occurring yearly for the Christmas Special.

In the Magic Kingdom, the new show didn’t quite catch on as well, lasting until February 1992. I think that a large part of this reason is that most Disney World guests are there on a vacation, so the vacation theme isn’t quite as enthralling as in Disneyland, where most guests are passholders, so the idea of going on a vacation is a lot more exciting.

Over in Tokyo Disneyland, the Vacation Hoedown is still a huge crowd-pleaser, just like the Christmas Special, so Tokyo guests are lucky in that they get three different Country bears shows to enjoy each and every year.

All in all, while I love every incarnation of the Country Bears, my heart still lies with the original version because so much of the stuff is so absurd and would not fly in today’s day and age. It’s a shame that it is gone from Disneyland and that the Magic Kingdom only has the one version now, all of which makes me even more envious of those who can frequent Tokyo Disneyland.

Well, that brings today to a close, so here is your look at next week’s article.

Thanks for reading and happy holidays!