Welcome back to another “Ranked” article here on Laughing Place. This time, we’re heading to the theme park with the single most roller coasters: Six Flags Magic Mountain. Next year, the park will open their 20th coaster, Wonder Woman: Flight of Courage. Out of their 19 current coasters, I have been on all but two kiddie coasters, those two being Speedy Gonzales Hot Rod Racers and Magic Flyer (which I am physically too big to ride).

So with that, let’s countdown my Top 17 roller coasters at Six Flags Magic Mountain! 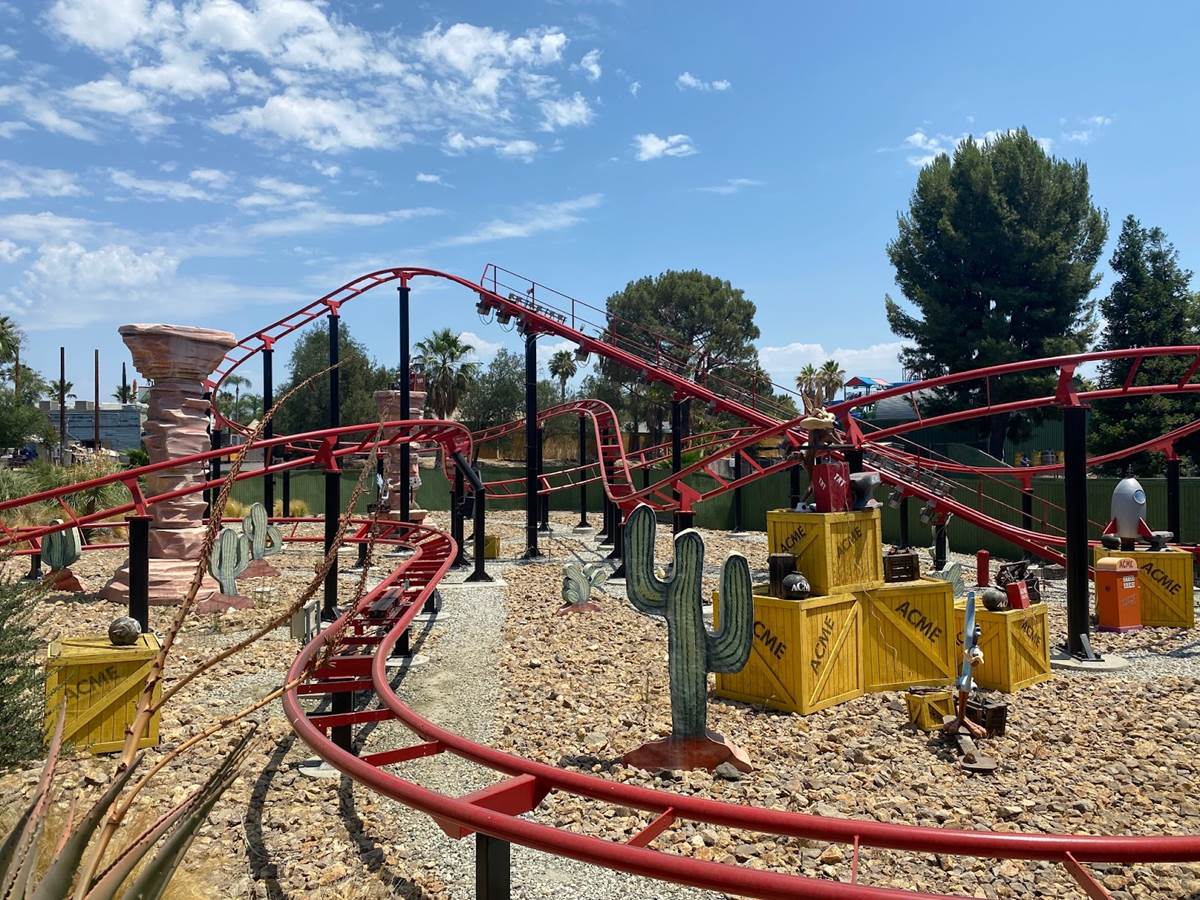 We start at the bottom with a ride that is by no means bad, but rather just small. Road Runner Express is identical to many other kiddie coasters across the country, such as Gadget’s Go-Coaster at Disneyland or Woody Woodpecker’s Nuthouse Coaster at Universal Studios Florida. The theming is actually pretty fun here, utilizing scenes and character figures from Wile E. Coyote and Road Runner shorts. Fun fact: This ride actually originally came from the now extinct Six Flags New Orleans, which was ravaged by Hurricane Katrina in 2005. 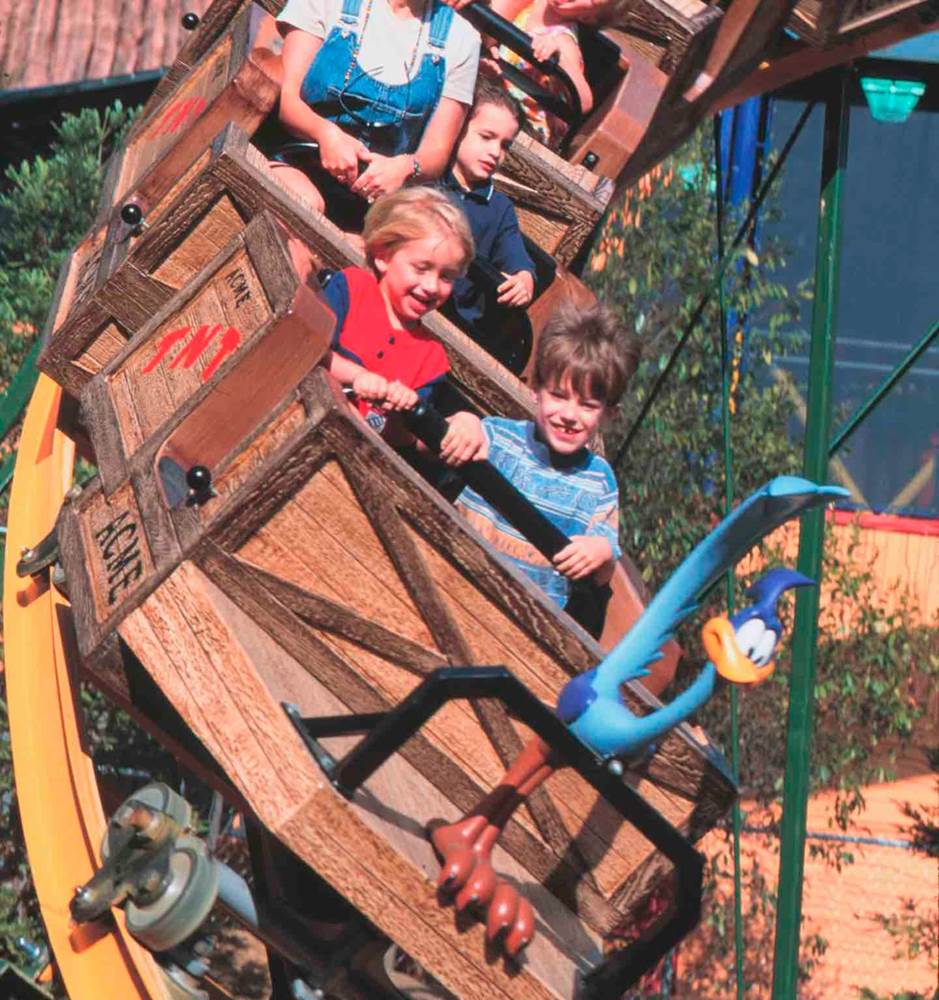 Another kiddie coaster, this one being so much better than I ever thought it could. You get thrown around so much by this ride, in a good way! The track is flat instead of rounded, much like with more modern Rocky Mountain Construction (RMC) coasters, which combined with some small bunny hops, makes for a really fun ride experience. 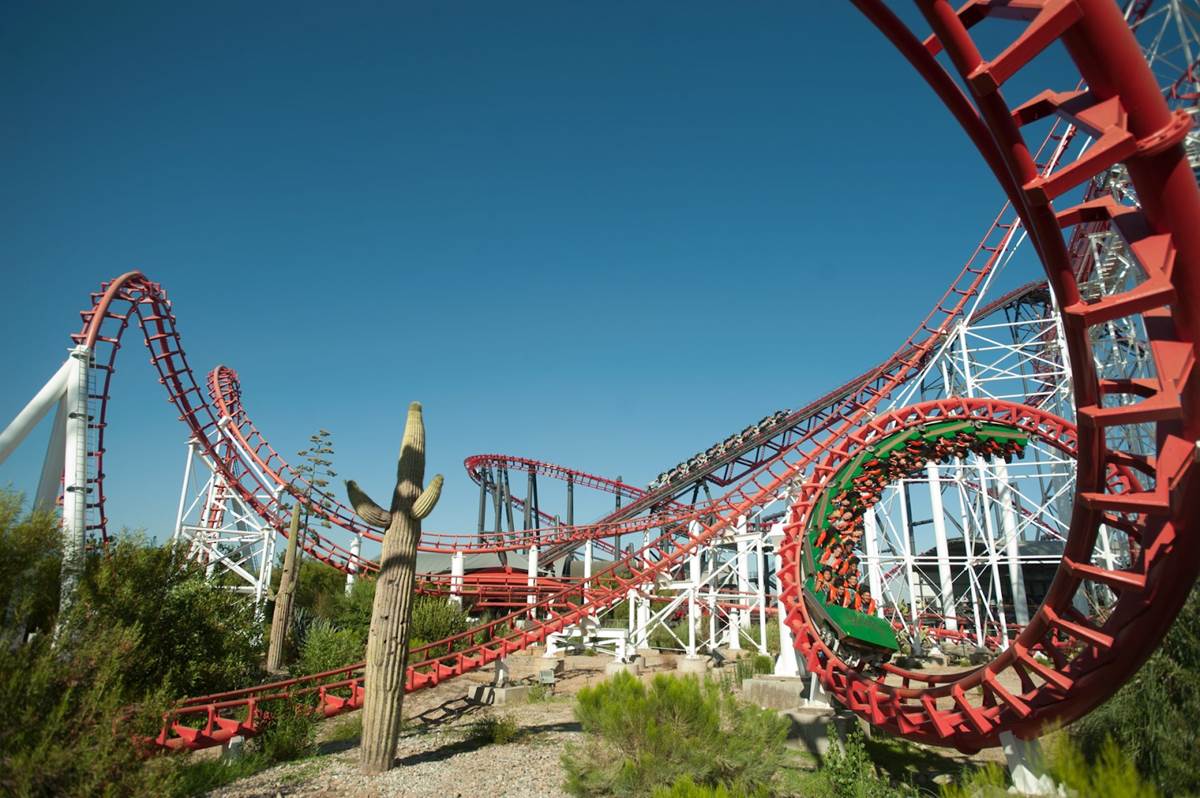 Viper is a rough mess. One of the latest remaining Arrow Dynamics mega loopers, this ride is definitely showing its age. I’ve ridden it twice so far, and the first time was very rough. On my second ride, I was able to ride defensively and better brace myself, which led to a slightly more pleasant ride experience. However, the restraint would come down multiple clicks each ride, which was very uncomfortable on my shoulders. I would get your rides in on this one while you can, as I don't envision it being around for much longer. 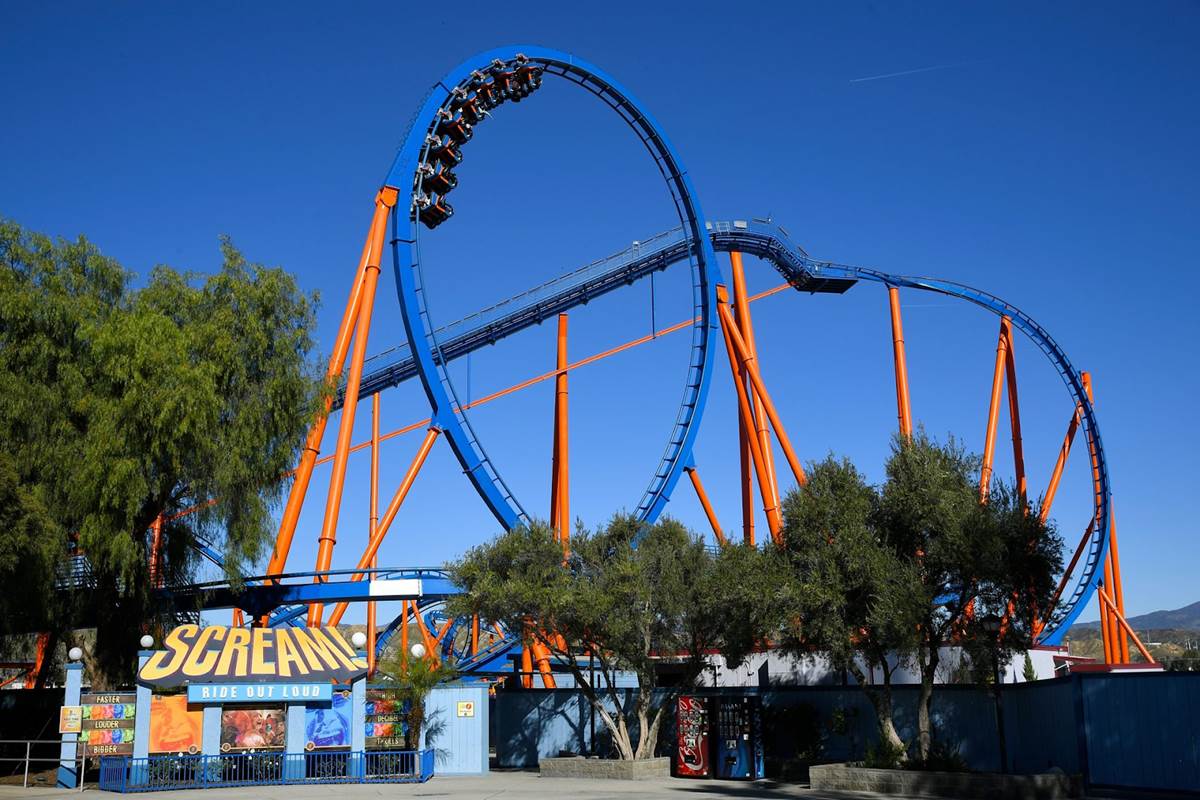 At any other theme park, Scream would be a star attraction, but at a park with such a large collection of coasters as Six Flags Magic Mountain, here it feels somewhat redundant. Infamously known as “the parking lot” coaster, Scream is actually a pretty rough ride for what typically is one of the smoother coaster types out there. It’s a lot easier to ride defensively than Viper however, giving it the slight upper edge. Take Scream, but give it stand-up trains, and you have The Riddler’s Revenge. This was my first and so-far, only, stand-up coaster, which offers such a strange sensation. It definitely feels like something that should not be allowed. The stand-up coaster is somewhat of a dying breed, so while it’s rough and somewhat uncomfortable, the uniqueness places it higher than those before it. Beware, this is one of the loudest coasters around. Whenever that train zooms by, you can’t hear anything else! 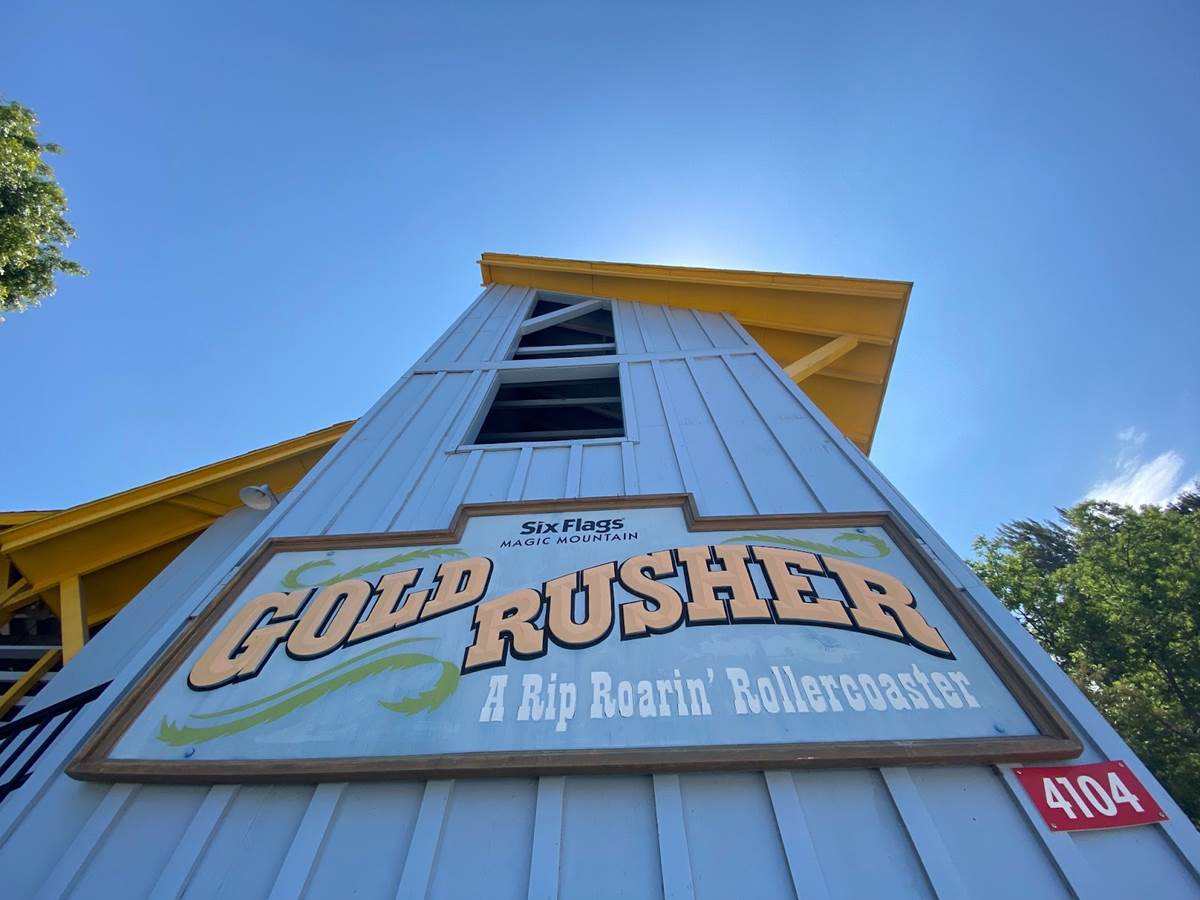 Gold Rusher is the park’s original roller coaster, debuting on opening day, May 29, 1971. For a coaster that is over 50 years old, this is still a pretty fun ride. It uses the hillside of the park's mountain to perfection, and the final helix is actually a lot of fun. SUPERMAN: Escape from Krypton is an intimidating one-trick pony. The first coaster to launch riders over 100MPH, that is all that the ride does. The gradual launch eventually takes you almost 400ft in the air, before you plummet back down. The park now offers one side with a forwards facing train, while the other side faces backwards. I’ve only done the forwards iteration, but I’d imagine staring straight down on the drop would provide an extra level of terror. Goliath is a ride that should be so much more than it is. Even with a 255ft tall drop, going 85MPH, it still almost feels as if you’re doing nothing. That’s due to the really gradual drop and subsequent pacing. Because of this, there’s almost no air-time on the ride. The finale of Goliath does pack a punch, however. You’re very slowly released from the mid-course brake-run into a rather intense helix that ends the whimper of a ride with a bang. 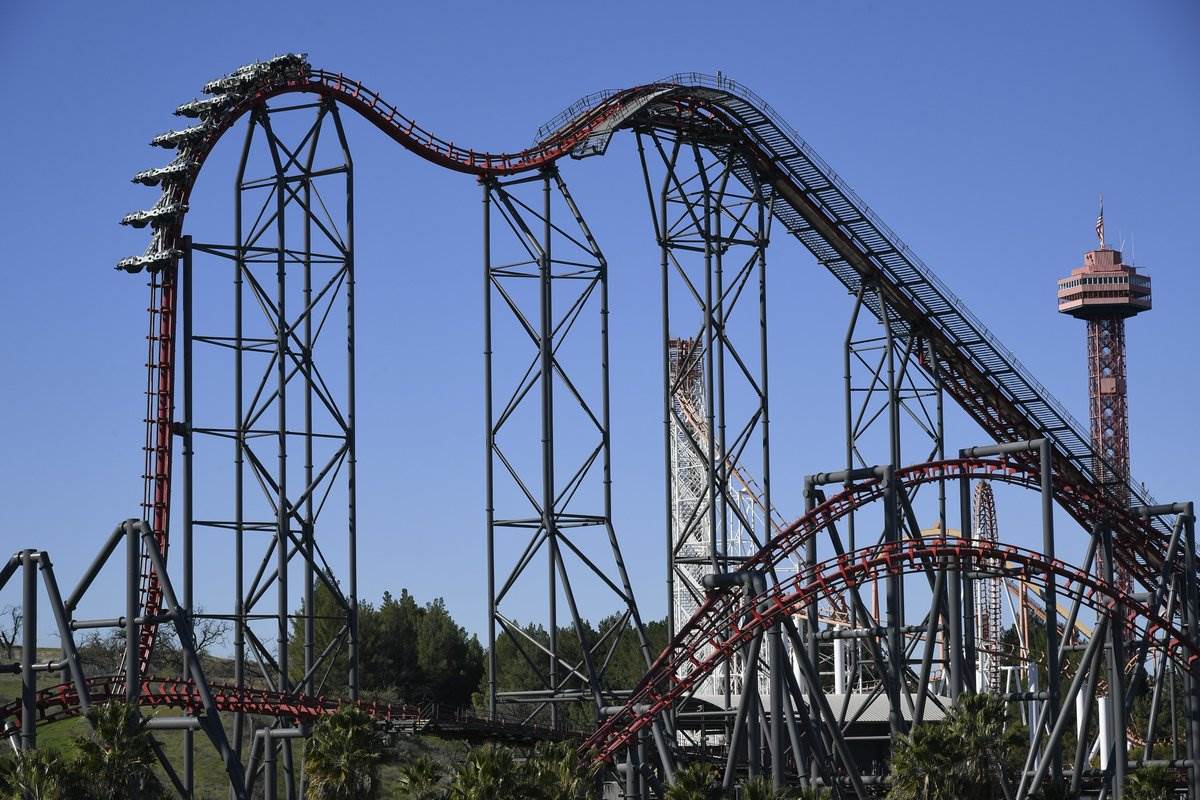 This was the one ride at Magic Mountain that I was the most scared to ride. Earlier this month, I finally faced my fears and took a ride on X2. I admit that due to the extreme uniqueness of X2, it really should be placed higher on this list. Perhaps it will when I’ve taken some more rides, but I came off it very disoriented. If you’re unaware of how this ride works, then let me break it down for you. Instead of a traditional seating formation, X2 has sets of 2 riders on either side of the track, and the cars rotate you at designated points. One moment you could be on your back, and the next you’re spun round to be on your stomach. This makes for an extremely dizzying ride, where you never really know what’s coming next. Once I’ve had the chance to ride X2 a few more times and get more used to it, I may like it some more. But for now, I’m placing it at #9. 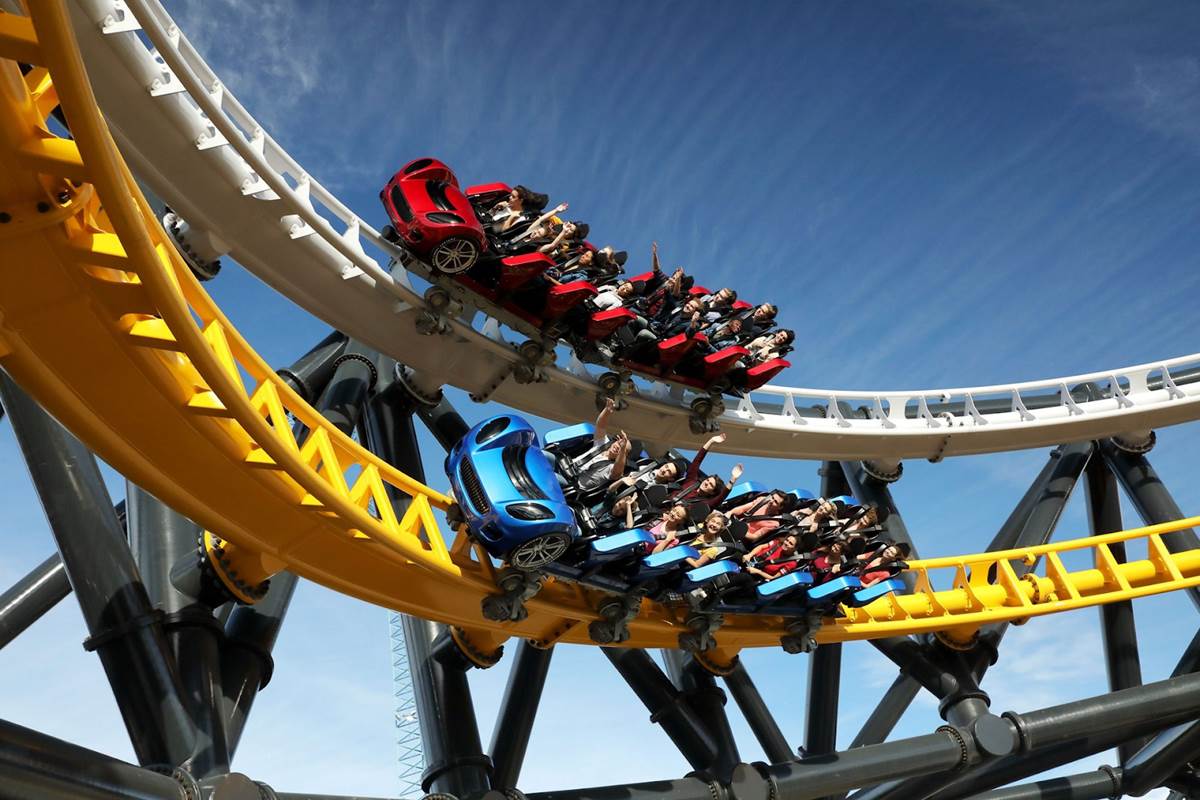 I had heard a lot of good things about the park’s newest coaster, West Coast Racers, with some coaster enthusiasts even placing it in their top 3 in the park. Sadly, I was a little underwhelmed by it. The ride itself was pretty fun, with a good launch and good, but also painful air-time. You complete both sides of the layout, with a themed pit-stop in the middle, which is nothing more than the guy from West Coast Customs on a TV screen. One thing I think this ride could really use is a themed countdown spiel for the beginning of the race, to get riders pumped up, and to let them know the race is actually about to begin. 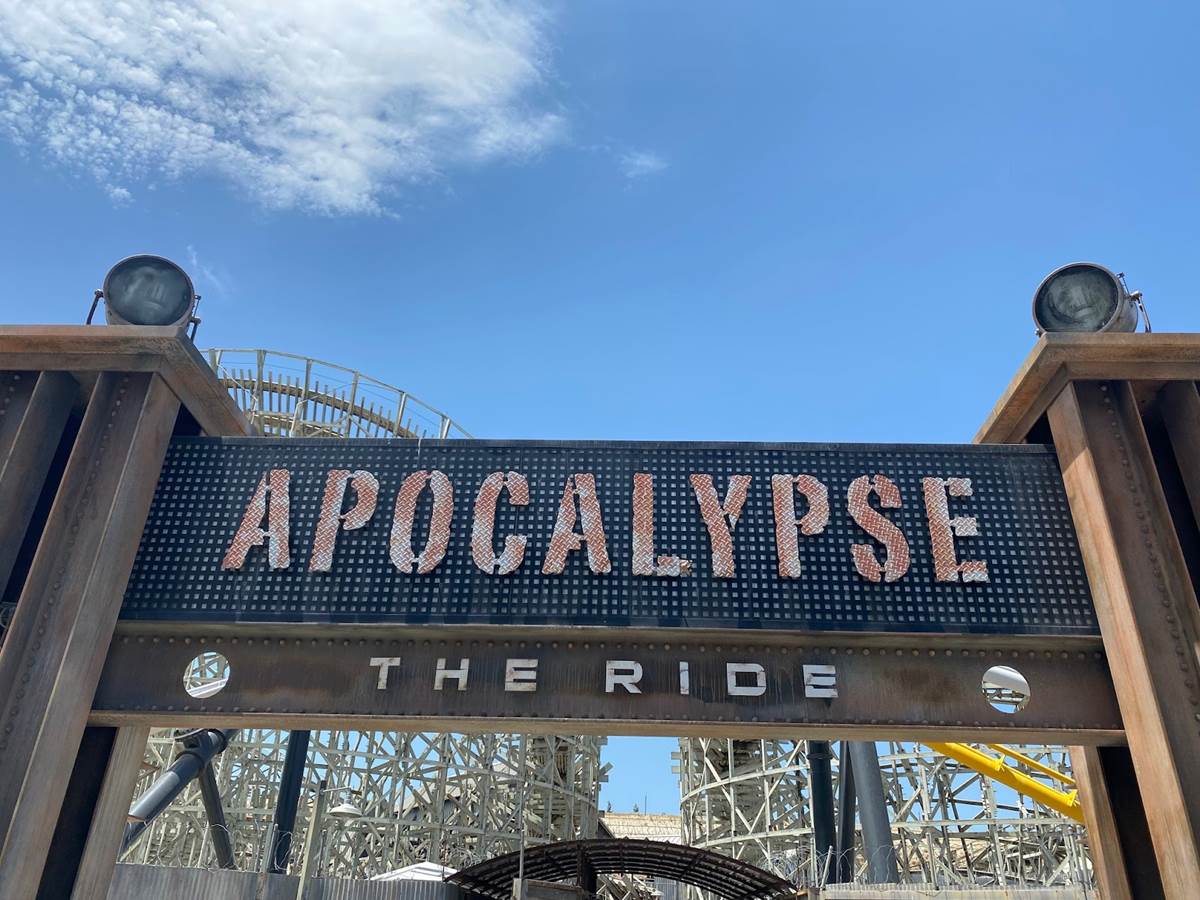 Apocalypse: The Ride has a fun history. It originally opened in 2009, themed to perhaps the worst Terminator film, Terminator: Salvation. This is a fun, modern wooden coaster that doesn’t quite stack up to the best two I’ve personally been on, Ghost Rider at Knott’s Berry Farm and Gold Striker at California’s Great America. Props to Six Flags for some decent theming in the queue, along with a station fly-by that adds extra kinetic energy to the attraction. 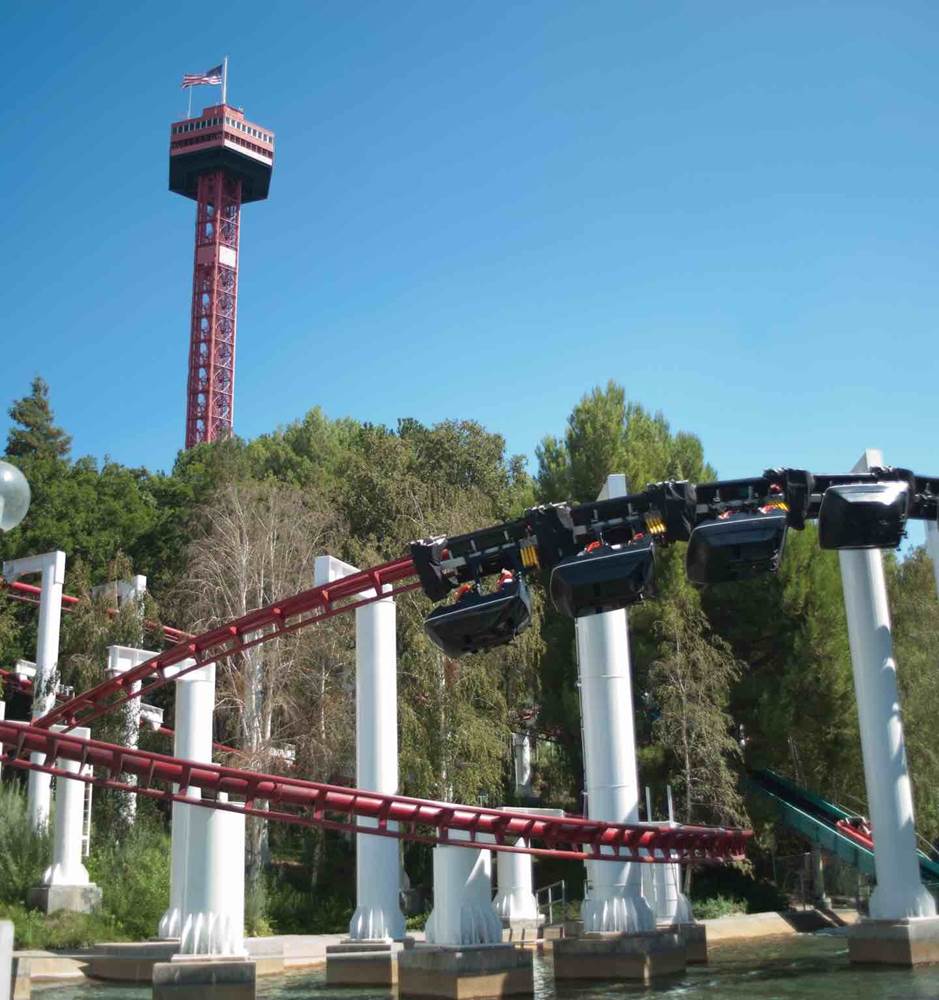 Ninja is one of the last of a dying breed of roller coasters. In fact, there are only 5 of this type of coaster left in the world, with 4 in the United States. Long before we had modern inverted coasters, such as Batman: The Ride, we had suspended swinging coasters like Ninja. While unable to do any inversions, the fun of this ride type lies in the swinging cars. The setting along the hillside, swooping down to the lake offers some beautiful views. Ninja is also one of those rides that ends up being a lot more thrilling than it looks. Really, it’s just a lot of fun! Flashback to 1976. America is celebrating the bicentennial, and Magic Mountain is getting ready to debut the first modern looping coaster, then known as the Great American Revolution. Along with Corkscrew at Knott’s Berry Farm, Revolution modernized looping coasters as we know them today and really kicked off the aggressive coaster wars that would continue well into the early 2000s. Even in 2021, this ride still holds up fabulously well. When you first enter the park, the loop of Revolution is one of the first things you see, proudly standing behind a scenic fountain. The ride is forceful and extremely smooth for a ride of its age. The historical element also helps make this a top 5 coaster in the park for me. Batman: The Ride is the park’s aforementioned inverted looping coaster, a model pioneered by Bolliger & Mabillard in the early 1990s. While this isn’t the first of its kind, it is a clone of the original. Batman often gets maligned for being cloned so much, as there are 8 in the Six Flags chain alone. But just because it’s a clone, doesn’t mean it is not an incredible ride. While small in stature, this ride made up for it with incredibly forceful and whippy maneuvers that you just don’t find on many larger inverted coasters. B&M hit it out of the park with their inverted coaster right at the beginning, and it’s still a very popular coaster type to this day. Considered by many as the crown jewel of Magic Mountain, there are actually two coasters I like more than Twisted Colossus. However, this is by no means a bad coaster. A “iron horse” remodel of the park’s original Colossus wooden coaster by RMC, Twisted Colossus is a ride split in two halves, with two giant lift hills. The airtime and inversions on this ride are absolutely incredible, but almost too incredible, as I always walk away with sore thighs. The ride experience is truly elevated if you are lucky enough to get a duel, which doesn’t always happen. When it does though, the interaction from the other train adds immensely to the enjoyment of the ride. 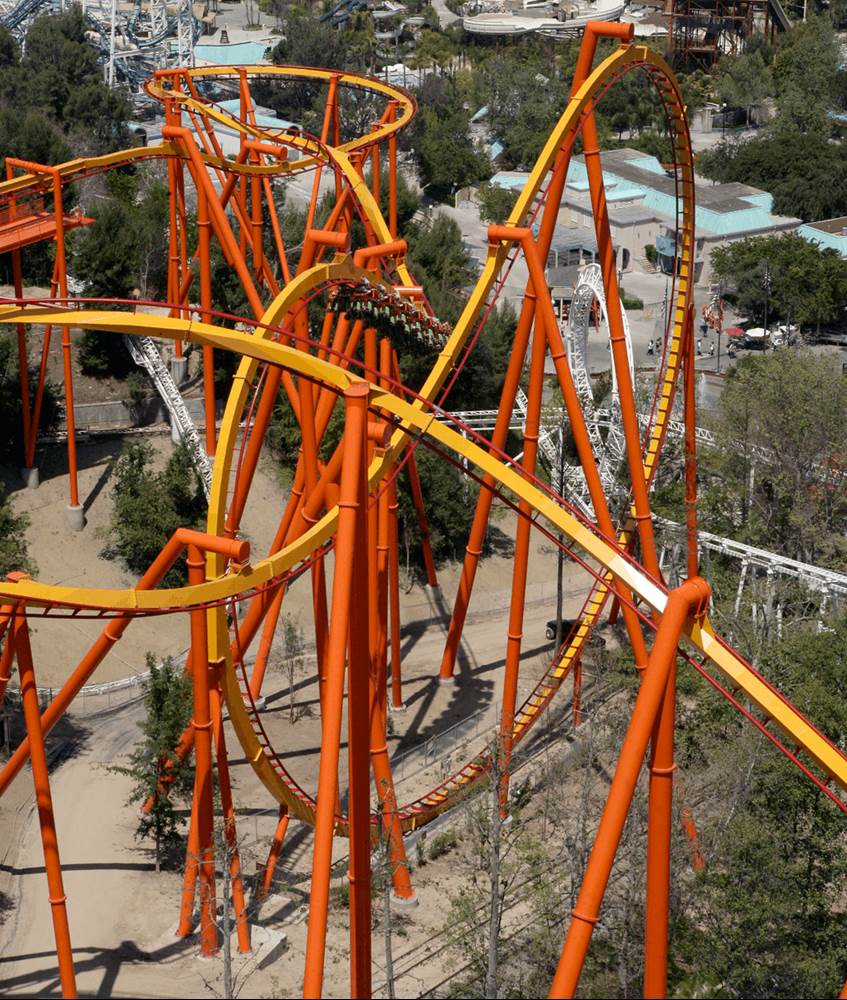 Another ride at this park that I was quite intimidated by was Tatsu, an absolutely immense flying coaster. I had previously rode a similar ride, Manta at SeaWorld Orlando, which is supposed to be a slightly less intense version of Tatsu. One particular part of the ride had me nervous: the pretzel loop. Undoubtedly the most intense part of the ride, named after a pretzel because it looks like one. This inversion thrusts you onto your back and is one of the most intense feelings on any coaster. If the intention truly is to make you feel like you’re flying, then this ride really does the job. You are so high off the ground, yet the swooping, but smooth maneuvers of the rest of the ride really feel great. An unexpected favorite for me. I was not at all expecting to like Full Throttle as much as I do. When it opened, it featured the largest loop in the world, and is still the only coaster to travel on both sides of the same loop. Full Throttle starts with an intense launch, which leads into the giant loop, providing some of the best hang-time on any coaster. Following that you have a backwards and then forwards launch to bring you back over the loop, where the ride ends with an incredible pop of air-time. My only complaint is that the ride is a little short, but with how incredible every single element is, I’ll forgive it!

I hope you all enjoyed this ranking of the roller coasters at Six Flags Magic Mountain. If you want to see some more theme park rankings, feel free to check out my other “Ranked” articles listed below:

Ranked: The Top 10 Extinct Attractions at Universal Orlando
TV Recap: “Queens” Sees the Girls Adjusting to a Member’s Absence in “Bars”
This Friday’s “20/20” to Focus on the Tragic Murder of Molly Watson
“Jimmy Kimmel Live” Guest List: Jim Gaffigan, Peter Dinklage and More to Appear Week of January 10th
Why I’m Restlessly Waiting for The Conclusion of Season 2 of Disney Channel’s “The Owl House”