After weeks of preliminary competition, fans got to see their favorite winner from this season of Holey Moley take to the greens again for their chance at a quarter of a million dollars in this week’s season finale. 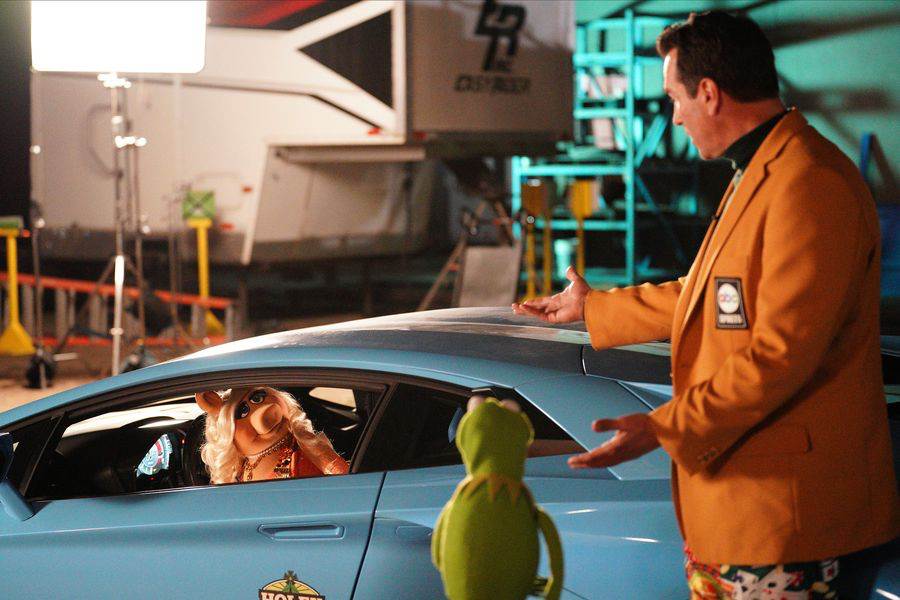 Recapping the subplot of the fourth season of the show, dubbed Holey Moley: Fore-Ever!, we are reminded of Rob Riggle’s efforts to save the show from cancellation in the hopes of a renewal for additional seasons. He has tried several ideas and collaborated with The Muppets, and viewers know that during the final hole, Miss Piggy will appear in a huge show-stopping number, proving to be the ultimate distraction for The Distractor. And, in case Miss Piggy is unavailable, sideline reporter Jeannie Mai is on standby, ready and waiting. 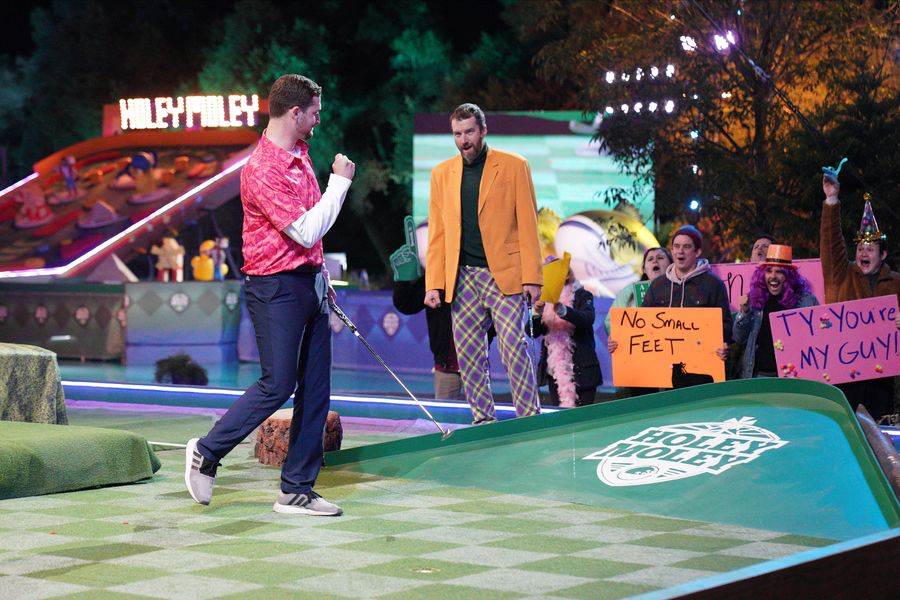 Despite The Muppet subplot, viewers expect to see the same extreme mini-golf competition we’ve seen throughout the season as the nine winners from the previous episodes gather together to take on the course for the ultimate prize of the bejeweled putter and $250,000. 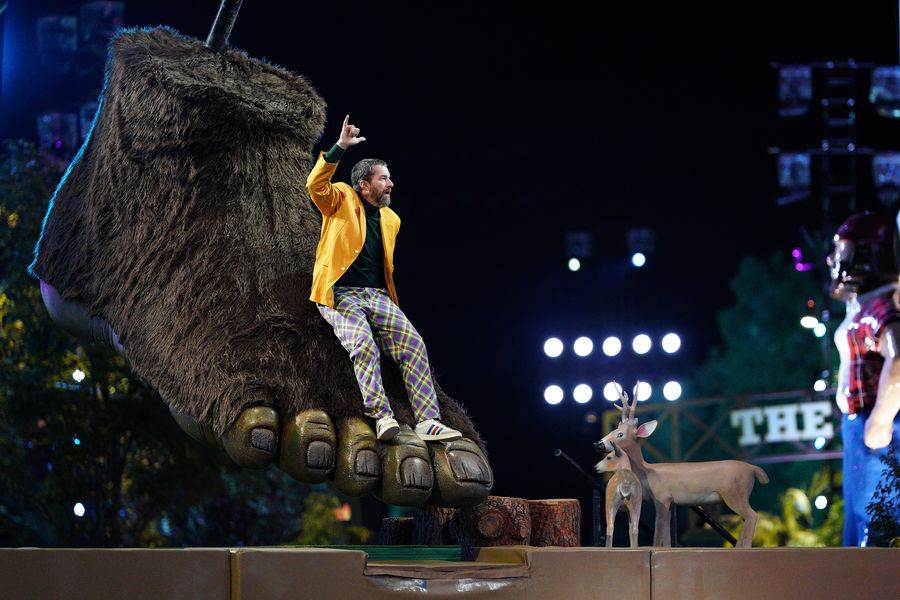 Now, three of those golfers approach the first hole of the finale, each wearing their winner’s plaid jacket. The first hole we see tonight? Full Mooney, appropriate since this was the debut season of this challenge. Kermit is sitting in the booth with Rob and Joe, more out of necessity than want it seems. The challengers, Dylan who owns the miniature golf course, and made his way successfully across Donut Hole, Erika AKA “Birdie” who had that phenomenal drop in win, and “Slip” Rick, who might be more known for his annoying catchphrase “Can you feel the urge?” and his comical slipping on each obstacle more than his actual golfing abilities. Each of these players (and throughout the rest of the finale) are accompanied by their own clip package to remind us of who they are. 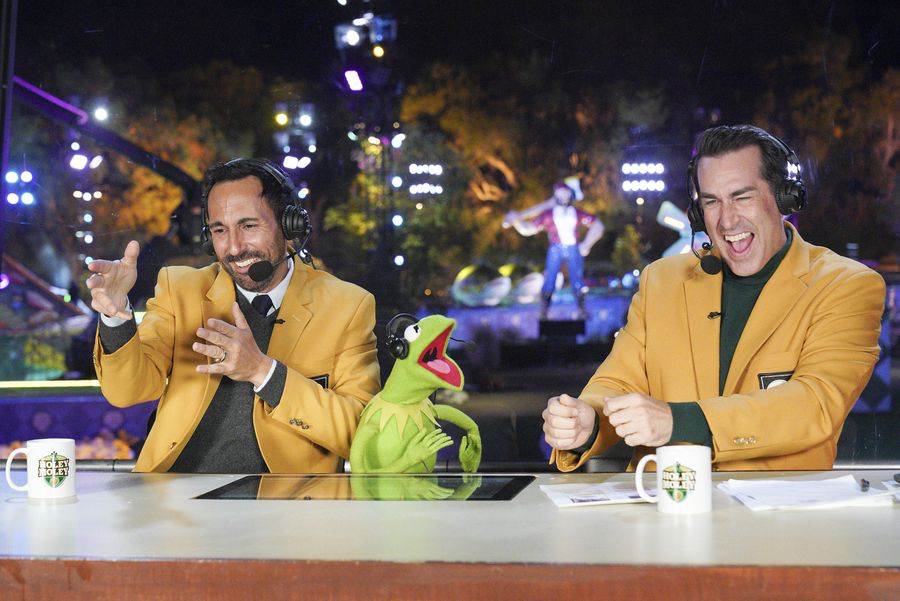 As for the actual golf, Slip Rick takes his fantastic putt and secures a tap-in putt when he eventually gets to the green. As could be expected, as soon as he climbs aboard the moon for his orbit to the green, he immediately lives up to his namesake and slips off, landing in the water and accruing a stroke penalty. Erika has an equally good putt but at least makes it a bit farther on her orbit than Slip Rick did before falling into the water. Now it’s up to Mini-Golf Tycoon, Dylan. Because of his career owning a mini-golf course back home, Kermit expects nothing less than a hole in one, and Dylan comes dangerously close to that happening, but just misses. He also immediately finds himself in the water before he makes it to the green. All the golfers are in great positions and a putt-off seems likely, but Erika misses her easy putt and immediately is out of the final competition. Dylan takes his putt and makes it, forcing the putt off. Rick comes close, but his putt over the ridge sends him slightly off-course, giving Dylan the advantage to now calculate that, where he makes and moves on to the next round. The next hole brings us pro-golfer Jaime, Young-at-heart Kathy, and the nerdy cowgirl Katie, as they take on Holeywood, which has already been seen by some of these golfers. They’re still trying to avoid the Rob Riggle drop zone, which leads to another comedy embargo from Rob. Katie lands herself on the Jeannie Mai star, with better placement to putt from. Kathy finds herself in the water and the Rob Riggle drop zone, and experienced Jaime did a lot better this time around finding herself on the Joe Tessitore store, with the best putting placement. Kathy’s very distant putt surprises everyone when she dishes out one of the best putts we’ve ever seen on the show, landing a hole in one from the Riggle Drop Zone. Katie and Jaime have to match in order to force a putt off and win, but neither of them do, and Kathy moves on to Round 2. More importantly, Joe finally admits that the Riggle Drop Zone might not be that bad after all. 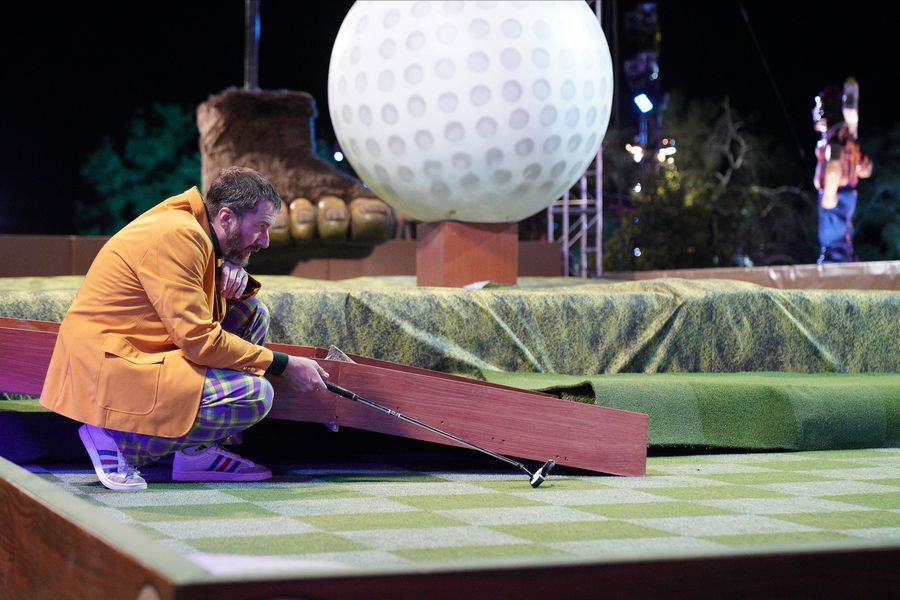 The next champions are up, and they are Nate – the Rob Riggle impersonator dude, Chill Will, and Tyler the Sax Man who wrecked his….future…on Holeywood. The group is set to take on Big Foot Wedge, again a hole that some of these players have seen previously. Tyler takes the first putt, landing in a nice position on the green, but the swing from the Big Foot of Bigfoot is where it counts, but he misses the landing pad and incurs a stroke penalty. Will’s putt has a bit too much pepper, but is a makeable putt. His big foot launch also ends in failure, leaving the first two golfers tied. Nate approaches with a great putt as well, and like those before him, also misses the landing pad. All the golfers are fairly evenly matched but it’s Tyler who ends up securing the win and moving on to the next round. 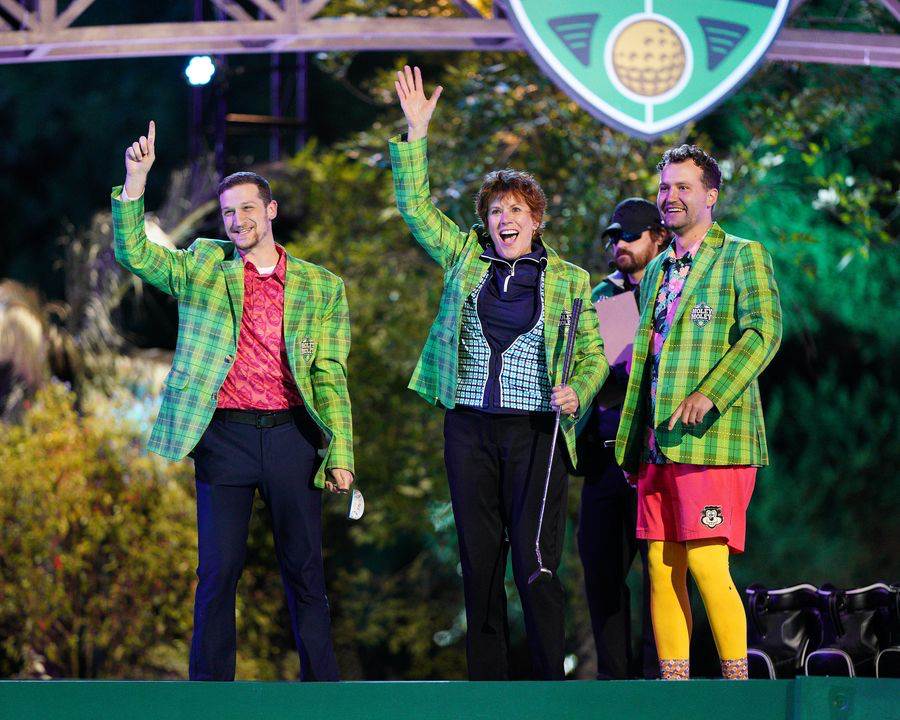 Tyler, Kathy, and Dylan are now all in play for the second round, which will be a knockout round with only the top two performers moving into the final round at The Distractor with Miss Piggy. I also think this is the first time we’ve seen this hole this season, as they take on Par-Cade, where players must putt up a giant pinball-esque board to get their ball into a slot (which pays homage to other past Holey Moley holes) for prime placement on the green. They must then run across giant flippers (above a pool) and make it or incur a stroke penalty. Uranus is clearly the one to aim for is it basically delivers your ball right into the hole, and if it makes, Players can skip the flipper obstacle and stay dry. Dylan hits Double Dutch Courage and fires his ball well past the hole. He doesn’t fare much better on the flippers, where he takes the downward flipper movement as his ill-timed opportunity to run and ends up directly in the water. Tyler hits Putt Bunyan and lands closer to the hole, but he does terribly on the flippers as well, running again on the downward motion into the water, frustrating Riggle and viewers everywhere. Kathy is up for her shot, and she makes it directly into Uranus and directly into the hole for her second hole in one of the night, securing her spot in the final round. Rob, Joe, and everywhere are shocked (myself included) and filled with excitement for two back to back hole in ones for the first time ever on the show. But, Dylan and Tyler are still playing. After a commercial break for suspense, we find out that Dylan will be moving on. The pair moves on to the final hole, The Distractor, for $250,000. The hole is supposed to feature a huge show stopping number with Miss Piggy but she doesn’t seem to be anywhere. Turns out, she’s locked in her dressing room. Looks like sideline reporter Jeannie Mai will have to step in and take over distracting duties alongside the crazy cast of fur suit characters from the series, along with dancers and the like for what may be the hardest hole in one they’ve ever pulled off. Unlike the usual Distractor, this putt is 25 feet long, has a turn, and the distraction of this showcase is not hidden behind a rotating wall. 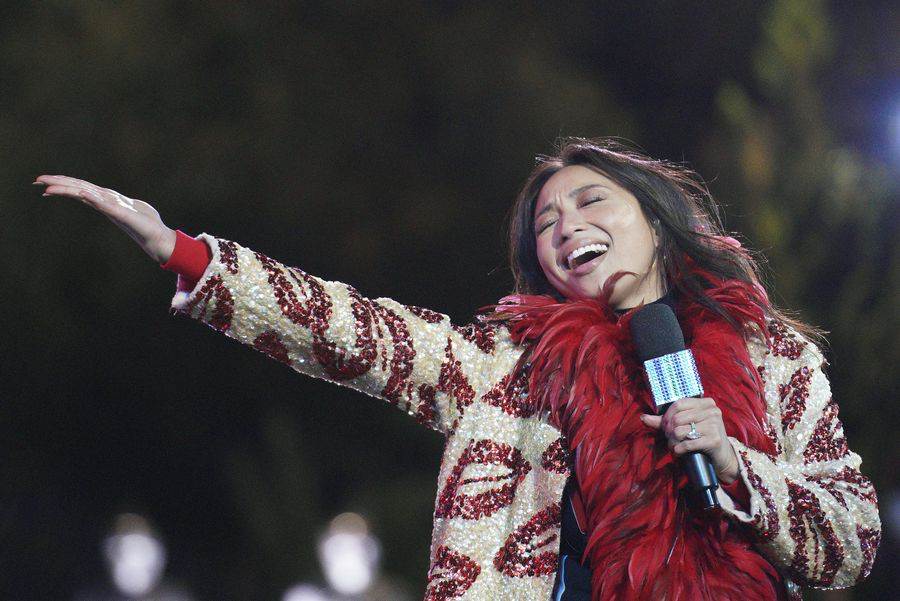 Dylan takes his putt, and has to get around Jeannie and her feather boa, and the earworm of the song she is singing that is also begging ABC to renew the show. The putts between Dylan and Kathy keep alternating as they keep trying to find their lines into the hole while Jeannie and the characters keep dancing. This part of the course has become a party with two people putting right through the middle of it, all while the giant screen behind them asks ABC to “Pick us up.” Kathy is the one who makes it into the hole and joins Jeannie in the song before she gets the jeweled putter and her $250,000. Joe and Rob sign off and we all hope that there is more Holey Moley in the future. Personally, I felt that The Muppets in play this season were similar to Arthur Fonzarelli strapping on some water skis before hitting some ramps, but hopefully Holey Moley returns, because as much as I love The Muppets on their own, they were hastily thrown into this season and I’ll probably always blame them if Holey Moley ends here. 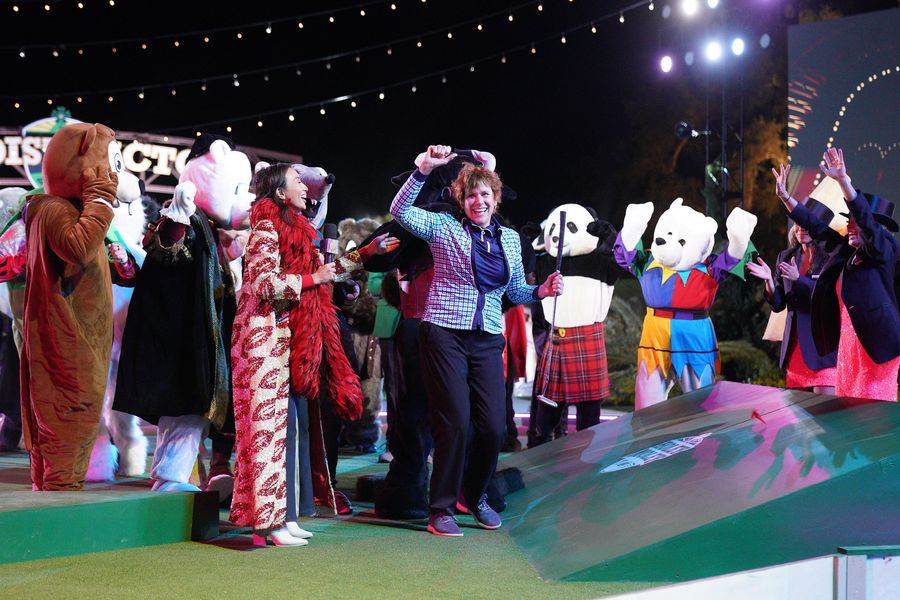 You can catch up with the whole of this season of the ABC show, Holey Moley: Fore-Ever! Now on Hulu.