Happy 4th of July! Welcome back to Disney Extinct Attractions, bringing you the attractions of the past, today. My name is Cole, and I’ll be your unofficial emcee on our journey through America’s musical history.

The Fourth of July at the Disney Parks is a always very special experience (even if the festivities have died down a bit in recent years). The Disney Parks and America have always shared a special bond, with guests entering American Magic Kingdom parks along Main Street USA. These parks also house attractions based on former U.S. Presidents (Great Moments with Mr. Lincoln and the Hall of Presidents), so Disney clearly does not shy from away from proclaiming this connection to guests.

With that background in mind, this year, America will celebrate its 242nd birthday, but for today’s attraction we are going to have to jump back to America’s last major celebration, the Bicentennial. With Disney’s close relationship to America, Disney celebrated as only they could, with special parades, fireworks and even a new attraction.

But before we jump to that new attraction, let’s take a quick stop and look at the attraction that helped pave the way. Walt Disney’s Carousel of Progress first joined the Disney Parks after its marvelous run at the New York World’s Fair where so many classic Disney attractions got their start. Opening in the Carousel Theater in Disneyland’s Tomorrowland on July 2nd, 1967, audiences flocked to see the GE-sponsored attraction after hearing so much about it from the World Fair. Guests at Disneyland continued to love the attraction, but Walt Disney World’s success got GE thinking. Correctly feeling that the attraction would gain a broader audience in Florida because of all the tourists, GE practically forced the attraction’s move to the East Coast (where it stands to this day), leaving the Carousel Theater wide open.

But Disneyland took the loss of the Carousel of Progress in stride and replaced the show with a more American-themed show to celebrate the Bicentennial, filling two holes at once. 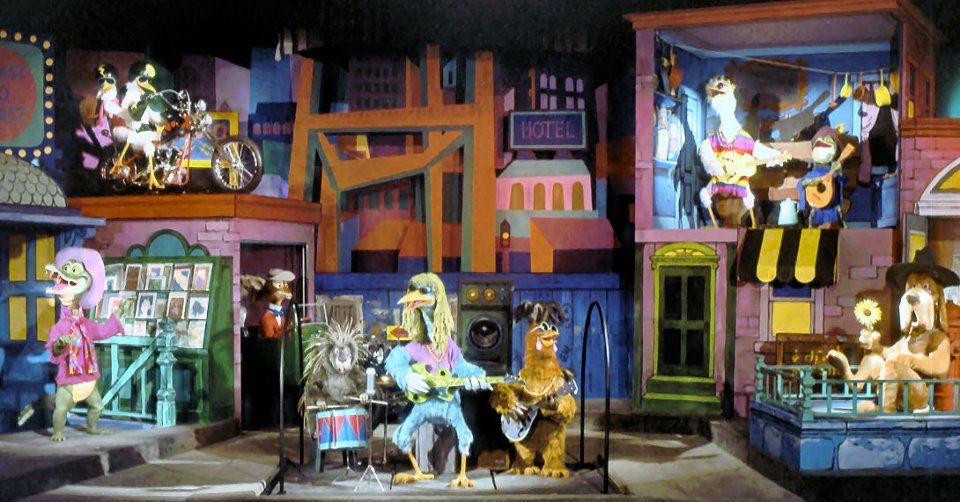 America Sings opened on June 29, 1974, just shy of the nation’s 198th birthday, giving park guests a full two years to prepare for the nation’s big day. The attraction was composed of an Audio-Animatronic animal musical revue. Does that sound like any other famous Disney attractions you may know and love? 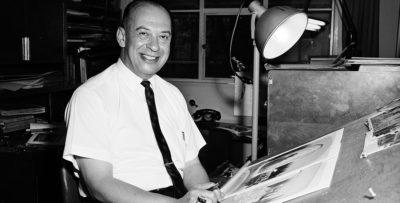 Other than their basic premise, one other huge common factor between the shows was Disney Legend Marc Davis. Marc was heavily involved in so many beloved Disney attractions, and the Country Bear Jamboree and America Sings are no exceptions to that rule. 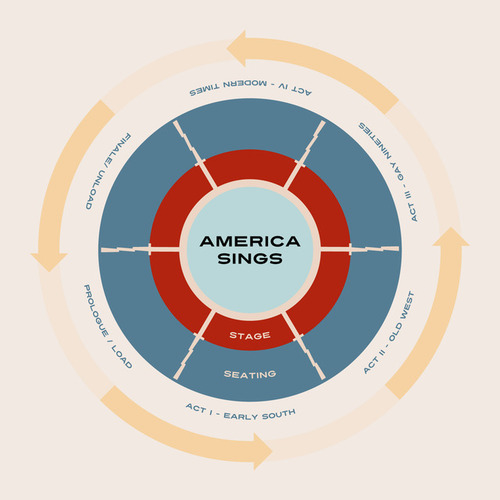 Davis had no easy task creating America Sings because shows that took place in the Carousel Theater had to be built into the unique design where guests traveled around the stage to watch the show. Guests would all file into their seats, and then, the seats would actually move the guests from scene to scene (as you can see in the picture above).

However, this attraction system was not flawless as, only nine days after America Sings opened, a tragedy occurred that would forever have an impact on the legacy of the attraction. Around 10:30 that night, a young cast member named Deborah Gail Stone tragically died when the moving walls in the theater crushed her head. From what I could tell, it seems that Stone was attempting to see how late she could pull her head out as the walls closed in, and she simply mistimed it, losing her life. Disney immediately went to work on creating walls that would break away if something similar occurred again, but the world suffered the unfortunate loss of a young life. 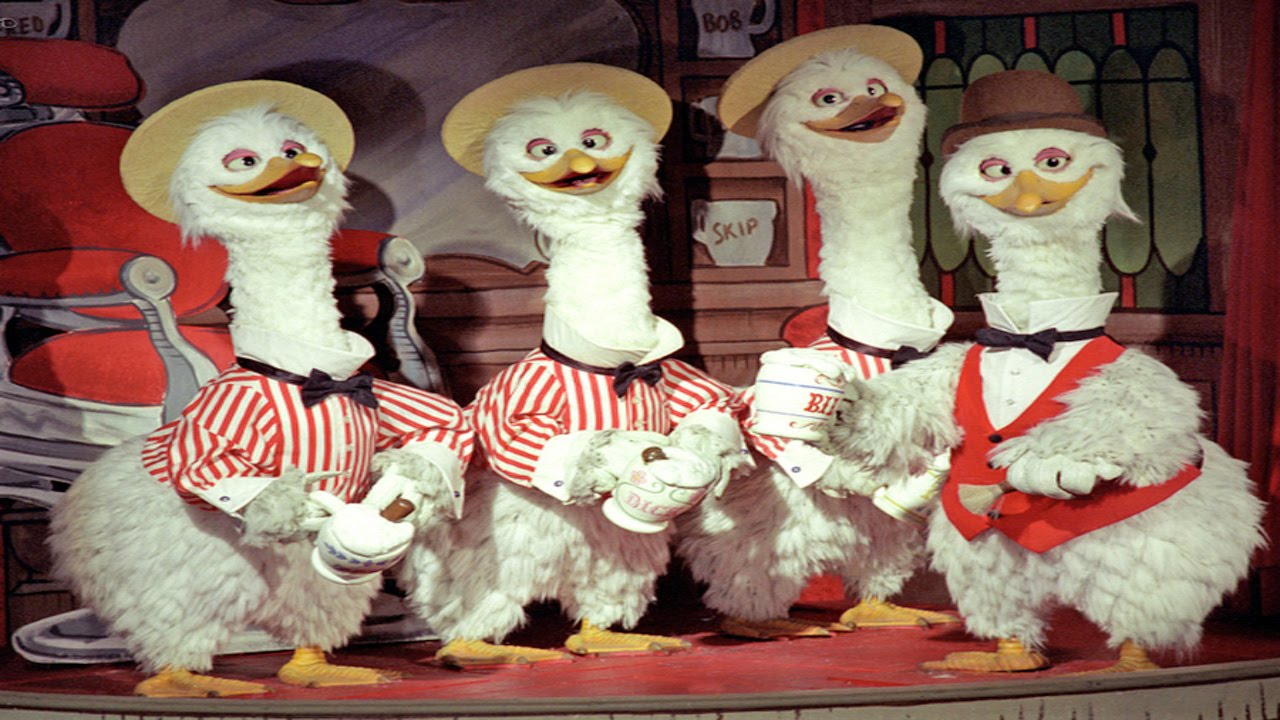 The attraction reopened three days after the incident and there were no further troubles at America Sings after that event. But with many identifying the attraction with that tragedy, a lot of people forget how truly unique America Sings was. The attraction attempted something that had never been done before, that is, creating a coherent show centered around the storied history of American music. I personally think that it was a brilliant idea for an attraction.

Sam the Eagle (not the one of Muppet fame) and Ollie the Owl helped guide guests through America’s entire musical history, accompanied by their favorite tune, “Yankee Doodle.” Guests had quite a journey in store as they traveled to the Deep South, headed West, visited the Gay Nineties (an interesting choice of words that I don’t think would be used today for fear of offending someone) before making their way back to Modern Times.

What intrigued me as I watched the show was that it almost felt as if I was listening to iTunes samplers of all the songs because they would try and fit six or seven songs into about five minutes. It worked flawlessly, though, leaving me wanting to go out and look up the full version of these songs. 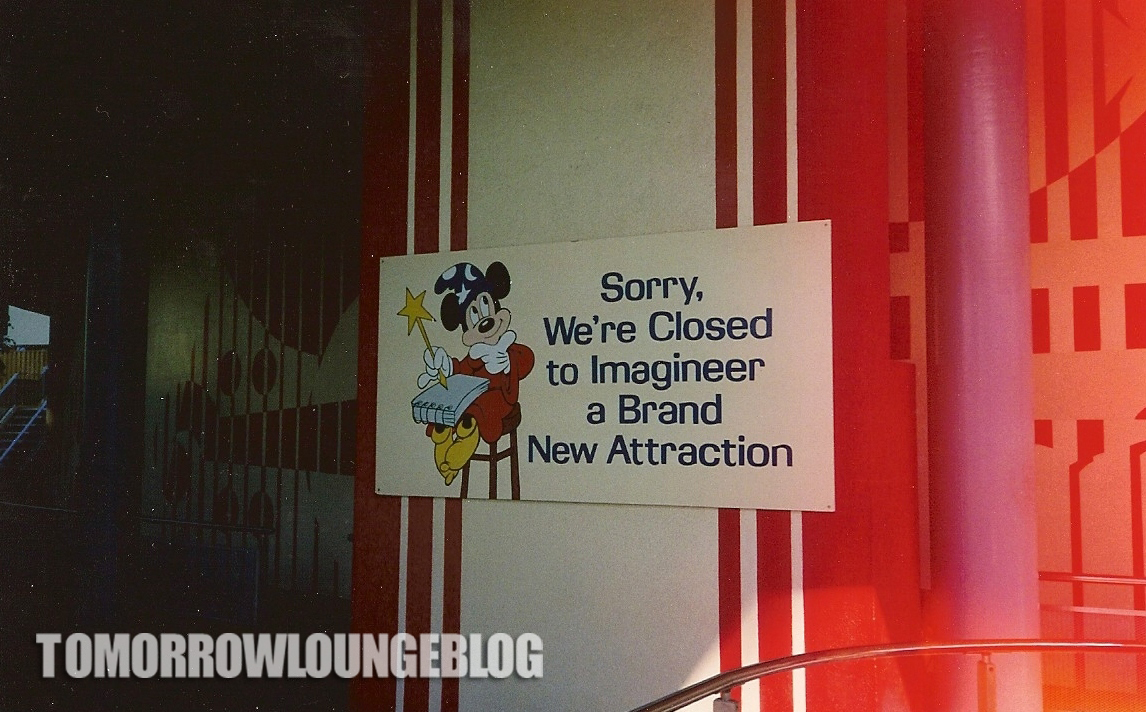 All good things must come to an end in the Disney parks, and sadly, America Sings is no exception to that rule. Fans of the attraction could tell the end was near when the quartets of geese featured in the attraction suddenly became trios of geese in 1986. But don’t worry, you can actually still find the geese, albeit looking quite a bit different. The skeletons for these geese made their way over to the brand-new E-Ticket attraction, Star Tours, where they can be found in the queue to this day.

America Sings ran without those geese for another two years before closing permanently on April 10th, 1988. The show was simply no longer in vogue because the Bicentennial celebration was long over, and the attraction began to feel outdated as many Disney shows tend to do. But America Sings endured a better fate than most extinct Disney attractions because you can still find almost all of the Audio-Animatronics from the show in a Disneyland attraction today. 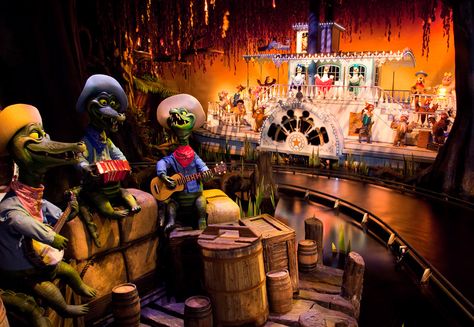 Another reason that America Sings closed down was because of a little attraction called Splash Mountain needed the Audio-Animatronic animals. In a truly cost-effective move, Disneyland was able to cut down on its operational costs through closing an attraction down, while transferring a large part of the former attraction, helping cut fixed costs of building the new attraction. (Whoever organized all of that definitely got a promotion.)

The animatronics truly do feel at home in the world of Splash Mountain, not even remotely seeming out of place even though they weren’t made for the attraction. The main reason for that has to do with the fact that one of the main animators on the film Song of the South (the controversial film that Splash Mountain adapts) was none other than our friend Marc Davis. (Though, he was not a fan of the removal of America Sings and refused to ride Splash Mountain, according to his wife Alice Davis.)

Via Chip and Co

Back in Tomorrowland, the Carousel Theater functioned as office space for 10 years amidst the chaos that was the creation of Tomorrowland 2055. When the theater finally reopened to guests in 1998, it housed Innoventions, an interactive area where guests had the opportunity to learn about new technology. Unfortunately, Innoventions’ time at Disneyland has also ended, with the Star Wars Launch Bay currently taking residence in the theater, so no true large-scale attraction has ever replaced America Sings, helping it maintain its long-lasting legacy.

And with that, we have reached the unloading area in our journey through the Carousel Theater, and it is now time to disembark and see the rest of the park. But first, here is a sneak peek at next week’s post. 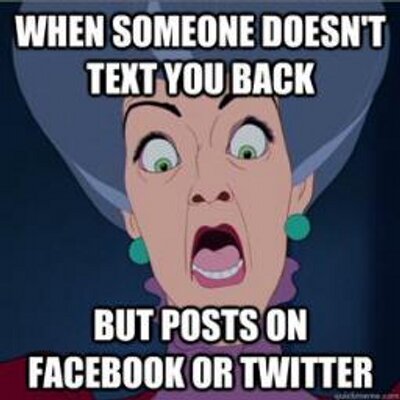